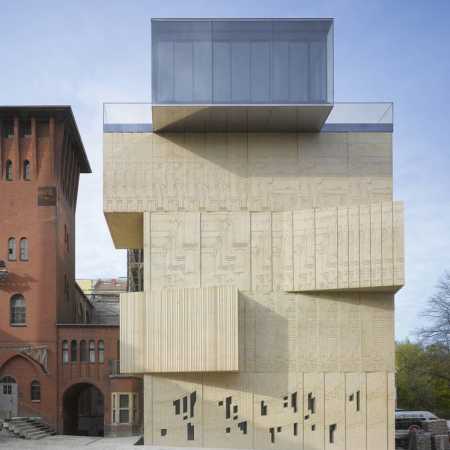 The Tchoban Foundation’s Museum for Architectural Drawing (Museum für Architekturzeichnung der Tchoban Foundation) has been located on the grounds of the former Pfefferberg brewery since June 2013. Architect Sergei Tchoban created the foundation in 2009 and also donated a part of his collection to it. Tchoban, who is a leading architectural drawer himself, collects outstanding drawings made by architects from the 16th to the 21st century with a focus on Russian Constructivists.

The museum’s building was designed by Tchoban’s Moscow office. The building’s architecture – with its light floor “blocks” that appear to have been stacked on top of one another and its exterior relief featuring details from architectural drawings – alludes to the very function of the structure. In the almost windowless sandstone cubes – one on top of another – the museum houses a reception space and library, two exhibition cabinets and a depot accessible to researchers upon registration. The glass cube on the roof is used as a meeting room.

The Tchoban Foundation displays four exhibitions per year in this building. The exhibitions consist of pieces from the collection as well as others stemming from cooperation agreements with international partners, including the Pariser École Nationale Supérieure des Beaux-Arts and the Moscow Architectural Museum.