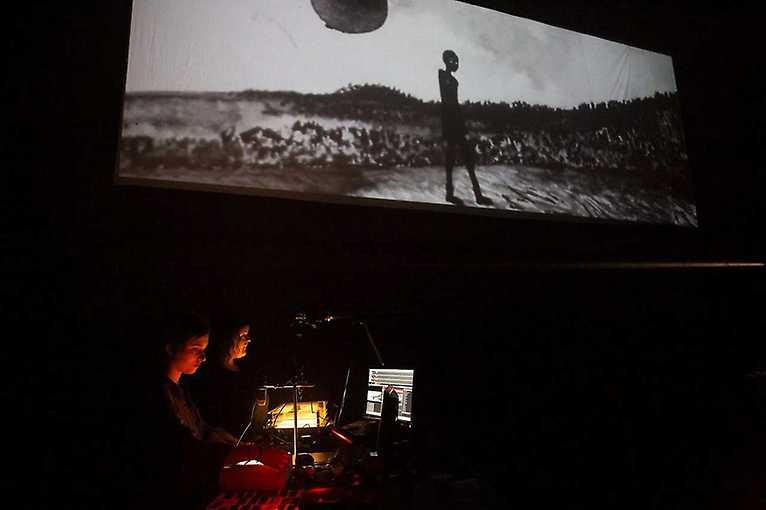 “An exceptionally suggestive audiovisual journey through a post-apocalyptic landscape.”

Tamura’s final journey. Volcanic gravel underfoot, the sun burning his back. The sound of his own shallow breathing is drowned out by irregular explosions somewhere in the distance. Wherever the eye looks, the landscape is scorched by the sun’s radiation and by the fires still burning on the plains. There is thick, choking smoke everywhere. Helplessness and desperation. And while the soldier Tamura is dying amidst this scene between war and environmental catastrophe, the viewer is encouraged to think and imagine and to become aware of the approaching apocalypse.

This performance, devised by Tereza Bartůňková, Jan Čtvrtník and co. follows loosely upon their previous project, Dialogue. They found inspiration for this new work in Japanese author Ooka Shohei’s novel Fire on the Plain. The performance creators paraphrase the dense storyline into a powerful audiovisual experience that is part radio play, part concert, and part comics. The sound, music, and visuals are created and mixed live, in real time, right on the stage.

Tereza Bartůňková and Jan Čtvrtník are classmates from the Department of Alternative and Puppet Theatre at the Theatre Faculty of the Academy of Performing Arts in Prague (DAMU). They have collaborated on several previous theatre projects, including Korvína (Corvinus, 2013), Vítězný houpací kůň (The Victorious Rocking Horse, 2014), and Nekonečný příběh (The Neverending Story, 2015). Tereza creates the visuals, and Jan does the sound. The duo was brought together by their similar artistic way of thinking.