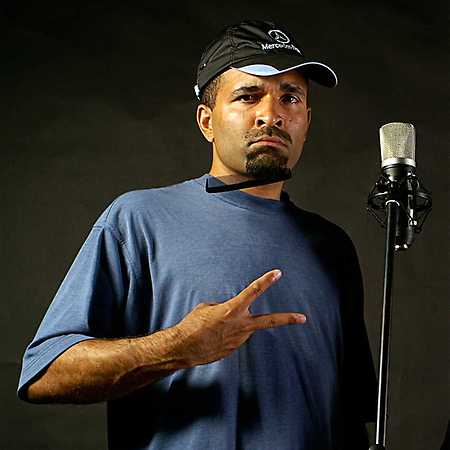 Kingsly Defounga, better known under his stage name Taktloss, is a German rap artist.
In the 90s he was part of the writer-group GHS („Ghetto Stars“) and achieved a certain level of fame within the hip hop scene. He was also called “Berlins most wanted sprayer” and his tag could be found in many places.

As MC Taktloss took part in the open-mic-sessions at Royal Bunker since they started. This is also where he met the members of the underground-band M.O.R., of which he became a founding member at the end of the 90s.
He became more well known to the public in 1999 after appearing on TV with Kool Savas as Westberlin Maskulin. The two separated in April 2000.

At the beginning of 2011 he made releases on the the label Label Home Recordings Battle Reimpriorität Nr. 7 (BRP 7). Later on he founded his own label FDB Rekordz (Fick Die Biaaatch Rekordz). Next to his solo albums he also recorded collaboration albums with friends.

Under the pseudonym Real Geizt, he can be heard on a number of songs by different artists. In 2017, 17 years after announcing it on the song Ich bin nicht weniger als du dir wünschst zu sein (“I am not less than you wish to be”), he released an entire album as Real Geizt. The album was titled Wie prophezeit.