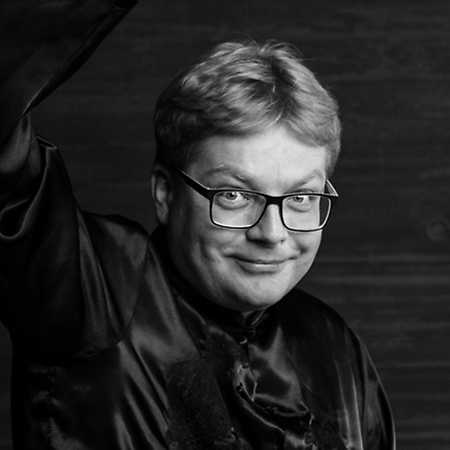 Szymon Bywalec is a conductor, born on 11th February, 1974, in Tychy. Bywalec came first at the 2nd Polish Showcase of Young Composers in Białystok (1998) and won two non-statutory awards (of Mr. Antoni and Mrs. Zofia Wit, and of the President of the City of Katowice) at the 6th Grzegorz Fitelberg International Conductor’s Competition in Katowice (1999). He received two scholarships from the Minister of Culture and Art for his outstanding artistic achievements, and was also granted the award of the President of the City of Katowice a number of times. Szymon Bywalec has given many world and Polish premiere performances. In 2000, he founded the Ars Musicae Chamber Orchestra, which specializes in performing early music, and the vocal ensemble Cappella Theoreticorum Cantans. In Poland and abroad, he has been a guest conductor for the Silesian Philharmonic, the Częstochowa Philharmonic, the Białystok Philharmonic, the Olsztyn Philharmonic, the Opera Polska orchestra from Wrocław (with whom he toured Germany) and the ensembles: Miskolci Szimfonikus Zenekar and Camerata Strumentale Citta di Prato. In May 2003, thanks to the Die Ernst von Siemens Musikstiftung scholarship granted by the Warsaw Autumn Friends’ Foundation, he conducted the National Radio Orchestra of Romania at a concert inaugurating the International New Music Week in Bucharest. He is presently the director of the Academic Symphony Orchestra in Katowice, and he runs the Karol Szymanowski Youth Symphony Orchestra (which in December 2001 participated in Nono Concerto di Natale in Vaticano). He is also the permanent conductor of the New Music Orchestra, which popularizes new music and 20th-century classics. With this orchestra, he has performed at many contemporary music festivals, including Warsaw Autumn (in 2005 he collaborated with IRCAM on the performance of Boulez’s Répons), the Silesian Days of Contemporary Music, the International Festival of Contemporary Music Melos-Ethos in Bratislava and Velvet Curtain in Lviv. With the said ensemble he also made archival recordings for the Polish Radio, prepared the first staging in Poland of Igor Stravinsky’s The Soldier’s Tale as translated by Jonasz Kofta at the Silesian Theatre in Katowice, and recorded the musical material for New Music Orchestra’s first album, which was nominated for a Fryderyk award in 2003.