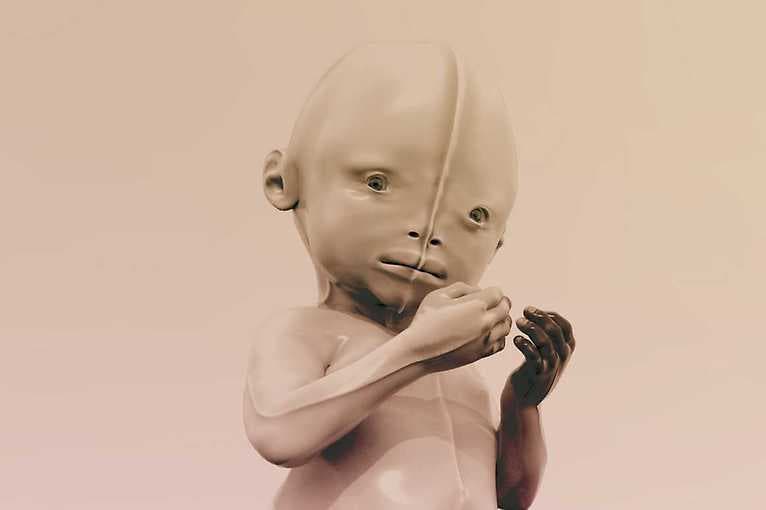 Sylwester Ambroziak is one of the most outstanding contemporary Polish sculptors. He has been actively exhibiting for 30 years, regularly surprising the audience and critics with new ideas and technologies applied.

From the very beginning he has been an individual artist and he will probably remain so. From the very beginning, he has clearly established a certain canon, the type of protagonist of his works, as well as the scope of the topics he touches upon. These are universal issues, referring strongly to the European art tradition, but also indifferent to the pop culture traits of our times, and involved in the most important contemporary problems – not only of philosophical, religious or political nature, as in the beginning, but also of ethical and social nature. It is worth remembering this, when looking at his figures with characteristic negroid, deformed faces, of ever larger sizes, which seem to break down the walls of galleries and museums, where they are presented.

The exhibition Innocence will present three groups of sculptures and animated films. In the unique space of the CCA’s column room, 7.26 meters high, the sculptures from the series Opusted (2010-11) will be suspended. This is a completely unique work in the artist’s entire oeuvre; an original and modern project, using traditional sculpting techniques in combination with movement and multimedia (audio and video). The figures, representing childlike creatures, are arranged in pairs. Shown in a squat, they meet each other’s backs, which connotes both their turning away from each other and their mutual support. Unspecified sounds, some resembling crying or a baby’s cry, some like animal noises, coming from speakers or headphones, reinforce the impression of alienation.

So far, this has been the most outstanding work by Sylwester Ambroziak with regard to its artistic aspect and impact. The sculpture and multimedia piece, attacking the viewer’s senses comprehensively; a complete piece. This group of suspended works has been complemented with the Launched (kneeling) – two black sculptures of monumental size, depicting kneeling toddlers, their heads joined, and a lying sculpture of similar size and color. The drama that takes place between the figures is one of union and separation. The two figures are one because their heads are joined. They are Siamese twins. They live together, but their further existence will be possible only after their surgical separation. They go in opposite directions, though they cannot separate on their own. And even if they did, it would mean the death of both of them (they are boys). The third figure is lying next, not far away, on his side, already separate, but probably already lifeless. She might have been a complement, a triplet, but she was born separately, which normally would be a happy circumstance for her, but in this composition, it has a final dimension – separately means lifeless, in the non-existence.

The third group of Ambroziak’s sculptures in the exhibition is Sandbox (2018): an installation based on a steel structure on which, as if on a stage, the title sandbox with real sand is placed. The artist has placed in it several seated toddlers who do not play there but are trapped in it, and over the steel fence someone has placed coils of barbed wire.

For the first time, however, it is not the sculptures and installations that are most important at the exhibition by Ambroziak, but his films. The artist has been making experimental animations for 10 years. The animations are closely related to his sculptures, as in fact, we are dealing with animated sculpture projects that “play” in films. Groups of Ambroziak’s sculptures will be accompanied by projections on large-format screens in the CCA’s column room. The following films will be shown: Peace, The Lamb, Messiah, The Meadow and Innocent. The last of these will have its official premiere at the exhibition and its title is also referred to in the title of the whole exhibition. This will not be the only premiere, as the artist is currently finishing work on his latest animation, which may also be exhibited at the CCA.