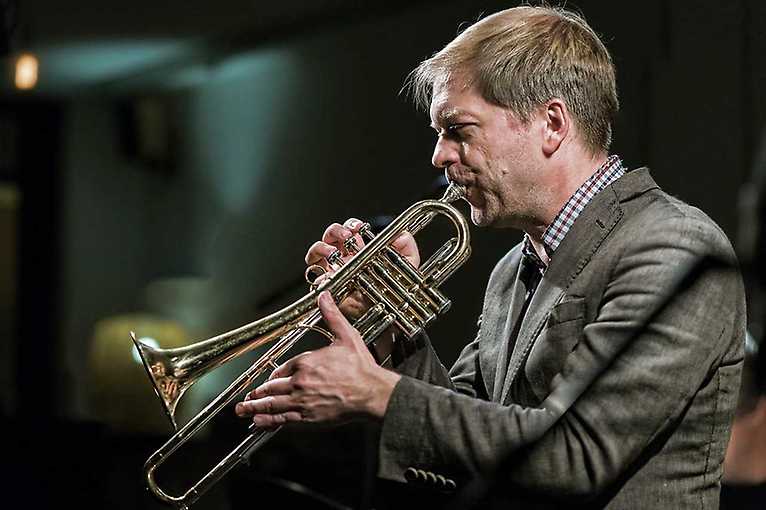 “Supersam +1” is a series of master performances. The project focuses mainly on music, however, it also includes other forms of expression such as: performance, multimedia, monodrama. “Supersam + ​1” will present respected Polish and foreign artists whose work is original, experimental and innovative. “Super” in the title means that the programme will be based on renowned artists – masters. “Sam” (from Polish, means „alone”, „by himself/herself”) refers to the solo performances as well as the creative loneliness. “+​1” in the title means that each evening will be crowned with a duo performance. In most cases, the artists will meet on stage for the first time.

Axel Dörner was born in 1964 in Köln, Germany. At the age of nine he started playing piano, at the age of eleven playing trumpet in a local music school. He studied trumpet with Jon Eardley in Köln and piano at the conservatory in Arnhem, The Netherlands, then from 1989–1994 piano and trumpet (with Malte Burba) at the Musikhochschule in Köln. He is one of the most unique voices in free improvisation. He developed a completely different language for the trumpet in the late 1990s. Most of the ensembles he is part of are characterized by a non-hierarchical collaboration of the musicians involved. He is mainly associated with musicians and communities of Berlin, London, Chicago as well as New York. At this time his discography consists of more than 150 CDs / LPs.

Michal Gorczynski is a clarinettist, composer and music teacher born in 1977. He graduated from the Fryderyk Chopin Music Academy in Warsaw. Since 1998, he has been composing music for various instrumental ensembles as well as theatre music (around 25 plays for drama and puppet theatres). He is active as an improviser and modern music performer. He is also the author of installations, theoretical writings, radio features, and underground films. Since 2002, he has been a member of Kwartludium ensemble, specialising in modern music performance. Since 2008, he has worked on extending the sound of the bass clarinet, inspired by beatbox and in cooperation with one of the leading Polish beatboxers, Patryk Matela a.k.a. Tik Tak. He has coined the term of “composed education.” He received grants for the creation of alternative educational manuals. Since 2013, he has been running a project entitled Music for Languages, writing original music for the Yiddish language (CD published by Multikulti Records), Japanese poetry (CD published by Fortune Records), and Persian poetry by Jalāl ad-Dīn Rūmī.