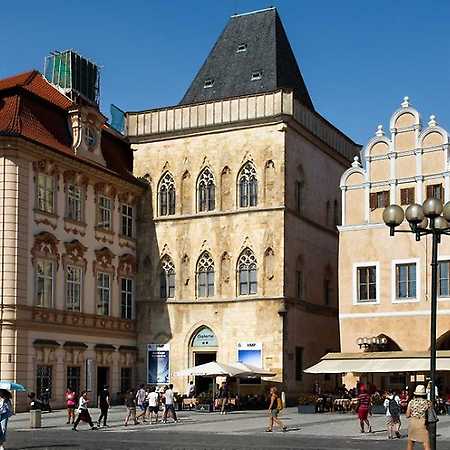 The most recent architectonic and historical research has documented that the beginnings of the Stone Bell House date to the latter half of the 13th century when an oblong side construction was built behind the massive tower corner and its thick peripheral walls. The traces of the earliest construction stage survived in the cellars and on the ground floor of the southern wing of the house.

The second stage of construction followed around 1310, when a chapel with rich figural and ornamental murals on the walls and vaults was established on the ground floor. The reconstruction from the latter half of the 14th century resulted in a representative city palace with a tower corner which remarkably documents the activities of the north-French court masonry and represents a unique example of this type of architecture surviving in Prague. The dominant feature of the front façade, lavishly covered with Gothic elements, was sculptural figural decoration. Its iconographic programme celebrated the idea of the kingdom and the ruling family, which has often led to the assumption that the builder was a person from the circle active at the royal court. The characteristic house sign was situated on the corner of the building in the 16th century. The Baroque adaptations of the house date to the period after 1685 and to the 18th century. The demanding reconstruction of the Stone Bell House, when the neo-Baroque 19th-century façade was removed and the Gothic frontage was discovered, was preceded by extensive architectonic and historical research.

The reconstruction was completed in 1988 and the City of Prague then assigned the house to the Prague City Gallery, which uses it as a space for its significant exhibition projects. The building also houses a bookstore offering a wide range of publications and catalogues, while the café is situated on the rear ground floor of the house.