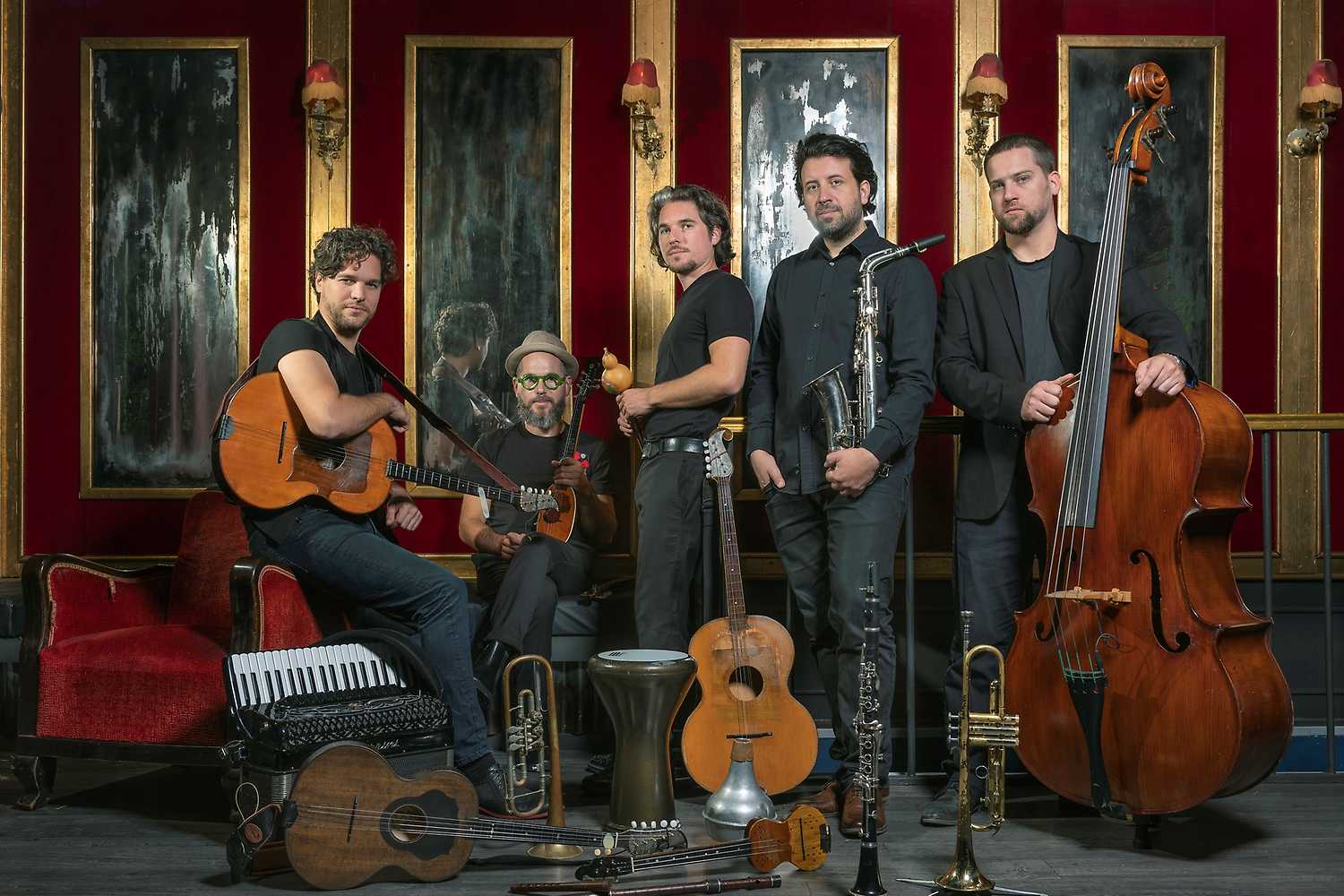 Tamburocket, the title of Söndörgö’s 2014 album, says it all, really. This record, that signaled their international breakthrough, neatly sums up how this Hungarian band sounds. The tambura, a plucked instrument with a bright tinkling sound, takes central stage. The band plays the strings with ferocious energy, breakneck speed and meticulous precision. Four members of the five-piece band belong to one extended family: three brothers (Áron, Benjamin and Salamon Eredics) and a cousin (Dávid Eredics) from Szentendre, a town on the Danube just north of the Hungarian capital Budapest. As the next generation of the musicians who played in the legendary virtuoso band Vujicsics they grew up with the music that is the mainstay of their repertoire –⁠ Serbo-Croatian songs and dances. This music is the heritage of people who fled north to escape Ottoman rule, and settled in various Hungarian towns and villages.

The members of Söndörgö have in-depth knowledge of the music they play. Not just because from their childhood it has predominantly been present as a sonic backdrop in their daily lives, but they are also academically involved with it, as teachers at the Department of Folk Music of the Budapest Conservatoire, the Liszt Ferenc Zeneakadémia. Scholarly rigor doesn’t mean that in their music Söndörgö slavishly copy traditional originals. On the contrary, they don’t treat traditional music as a museum object to be reconstructed, but as a living and pulsating raw material, a source of inspiration. They infuse their sources with new fire, they extend and embellish them with wild and wide-raging solos and improvisations, and write new pieces based on the sound and rhythms of their forbears – carrying tradition over into the future. Apart from the omnipresent tambura they also play clarinet, trumpet, accordion, double bass and, if need be, a variety of rapid-fire percussion instruments.

The albums Söndörgö released since they were founded 25 years ago show how their treatment of tradition developed. They absorbed influences from other regions, for instance on an album they recorded with the Macedonian music legend Ferus Mustafov. Starting with their Lost Music of the Balkans (2010) they became more interested in what they can add to tradition. On their most recent album, Eight 8 Eight (2019) they transcend the limitations of a strict genre. In a way you can say that Söndörgö has grown into a genre of its own. Making each song flow into the next, they present this album as one conceptual whole, structuring the songs in the same manner as their concerts.