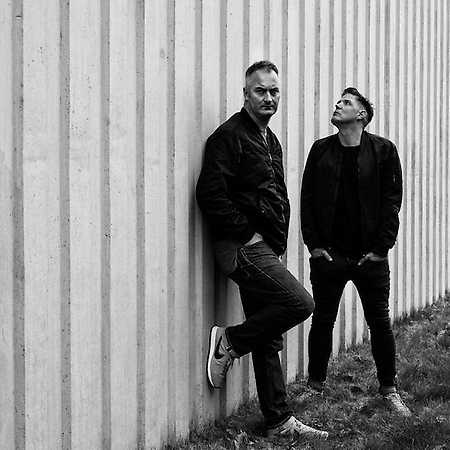 Slam are a producer and DJ duo from Glasgow, formed by Stuart McMillan and Orde Meikle. They are co-founders of Soma Quality Recordings. Their music style is house and techno.

McMillan and Meikle’s first club event was a weekly Thursday night called Black Market at Glasgow’s Fury Murrys club, presenting a mix of house, funk and rap. In early 1988, they were approached by Steven Sleepman after he heard his first acid house track. During a brief stint PRing for Club Eden, Sleepman secured a Saturday night at Glasgow’s Tin Pan Alley, which was to become the home of Slam. Slam then launched a Friday night at the Sub Club called Joy. Black Market still kept its own musical identity throughout the Summer of Love, playing an eclectic mix of musical genres.

Shortly after, Tennent’s Lager’s marketing agency approached Slam with a sponsorship deal to tour Scotland’s clubs over a period of two years. The tour ultimately led to Slam’s residency at T in the Park and increased their nationwide profile.

Slam have released various singles since the mid 90s, including Positive Education, Eterna and Lifetimes. They co-founded Soma Quality Recordings in 1991, alongside Dave Clarke. More recently, Slam Events was launched, a subdivision of Soma that deals mainly with the promotion of Slam and their club nights. Slam are currently residents at Pressure, a monthly event promoted by Soma and Slam Events at The Arches in Glasgow. They also have a residency at the Sub Club in Glasgow, at the Return to Mono nights.