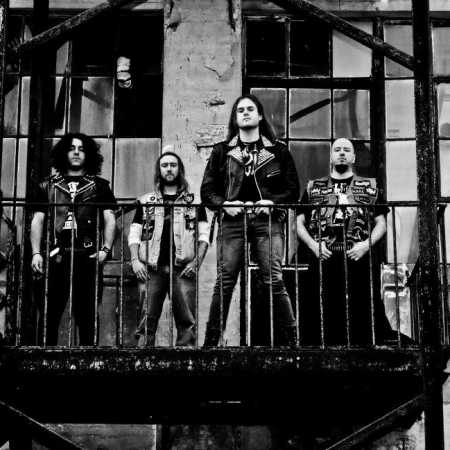 Seax  Fall to the Hammer

Seax was formed in 2009 by guitarist Hel, with the intent of playing classic Heavy Metal. The band found its first stable lineup late in 2010. By this time the music writing was leaning towards Thrash / Speed Metal. They started playing live in 2011, with their very first live appearance taking place at the Hotel Vernon, a DIY venue in Worcester, MA. Their first album High on Metal was recorded in August of the same year and released by the band on 07/05/2012. The album was well received among fans of classic Heavy Metal and helped the band establish their position in the scene. Later that year the band also welcomed their current Drummer, Derek Jay and Guitarist, Eli Firicano. Since then, the band went on to play a lot of shows, including a few tours and a few US Metal Fests, including Warriors of Metal, in Ohio, and Ragnarockkr in Chicago, IL. After a few lineup changes, they started recording their second album To the Grave. In 2013 the album was recorded and mixed by the band’s guitarist, Eli, and mastered by Jack Control @ Enormous Door Mastering. Matt C Axe moved to the west coast a few months after the album being recorded and Mike Bones joined the band on Bass. To the Grave was released by the band on 12/16/2014. A few months later, Carmine rejoined the band and after a couple of tours, they started writing their 3rd album. The new album was recorded and mixed again by the band’s guitarist, Eli. Mastering was done by Jason Buntz at Enormous Door Mastering. It was released on 9/28/2016 and its titled Speed Metal Mania. The band is embarking on their first West Coast Tour, playing across the country, to promote their new album. They will also be appearing at this year’s Frost and Fire Fest, in Ventura, CA.