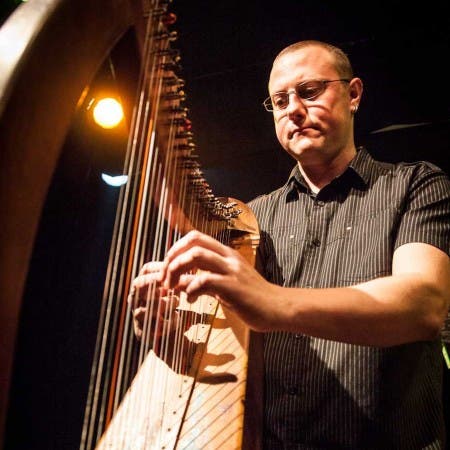 Seán barry is a young musician with a bright future. A champion harper who won the English and Scotish championships five years in succession, with the help of chairman of the tyneside irishcentre in Newcastle, Mr Tony Corcoran. Seáns musical talents have earned him numerous awards, medals, trophys, aswell as comendations during his short career. At 27 years of age, Sean originates from the city of Newcastle Upon Tyne in England, and although now based in Prague in the Czech Republic, Seán travels to and from his native home on a regular basis. Seán has appeared on a variety of TV and radio shows, both in the UK and Czech Republic. He has also featured in many UK groups such as ‘Ushna’ and 'Adderstone’and has performed along side American songwriter Keith Destry and Finish singer’Noora Ruohonen'. Seán is one of those enviable performers, who never suffers from nerves prior to a performance. He has performed at large festivals before audiences of thousands throughout Europe, aswell as more intimate venues such as folkclubs, theatres, artcentres and weddings. Seán has a variety of albums ranging from irish and scotish tunes played on harp,to his more recent own compositions.