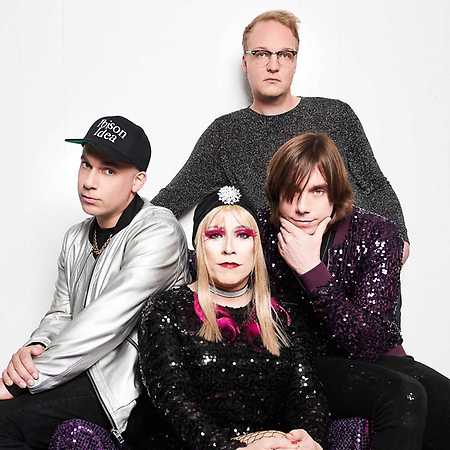 Schrottgrenze is a German indie band thats was formed in 1994 by Alex Tsitsigias and Timo Sauer in Peine, Germany.
During the 90s, the group played German pop punk, its high point being the release of the album Super. in 1998. Later on Schrottgrenze changed their sound to wavy indie rock and post punk. Throughout the years the group has played with different line-ups and has performed more than 300 concerts in Germany, Austria and Switzerland.

In 1995 they first released to demo tapes, which were followed by the vinyl EP Unehrlich, verlogen und stinkfaul. A couple of month later they published their first long player and gave concerts all over the country.
In 1998 they released the album Super., in 1999 the single and sample compilation Reibung, Baby!. After an extensive tour through Germany, the band paused for two years.
Between 2000 and 2002 the band moved to Hamburg and made their comeback with the released of Vaganten und Renegaten in 2003_. At the end of 2004 the Hamburg label Weird System released the album Das Ende unserer Zeit.
In 2006 Tobias Levin produced the album Château Schrottgrenze. This album marked the band’s sound change. It contains almost no punk sounds but shows the band’s preference for wavy, melancholic songs.
In 2007 a split-7" with the bands junges glueck, Herrenmagazin and Janka was released.
The same year the album Schrottism was published.

In April 2008 the band announced that they were going on a hiatus. Singer and guitarist Alex Tsitsigias took part in different projects during this time and became part of the bands Saboteur, Das Bierbeben and Station 17.
In 2010 the band played their last concert and broke up. However, this was not the end.
In 2014 they played a 20 minute set for the 10 year anniversary or the band Herrenmagazin. According to the band this was supposed to be a one time reunion. Nonetheless, they ended up playing three “gala” concerts to celebrate the release of the best-of-compilation FOTOLABOR 1995-2015, as well as a couple of festivals in 2015.

In 2017 they released the album Glitzer auf Beton through the Hamburg indie label Tapete Records. The album Alles zerpflücken followed in 2019. In the following months they starte touring again.