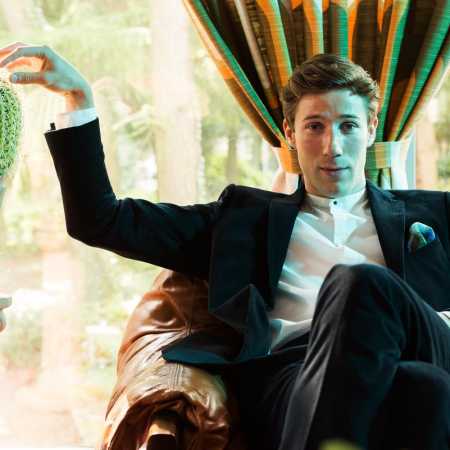 With his debut album Homotopia the Canadian songwriter Sam Vance-Law manages a gay manifesto and a musical marvel. Behind this bravado achievement is great musical talent, an impressive tenacity – and a little help from Get Well Soon.

Already his mother played the piano and the viola and also the little Sam began to learn with four violas and later the violin. His music teacher in Oxford discovered his voice and put him down in the choir. Over the years he has recorded 15 albums with the Choir of New College Oxford. There have been tours throughout Europe and five rehearsals a week. But even though Sam Vance-Law was born out of a musical education bourgeois household, Pop was definitely present in this childhood. "My dad loved the Talking Heads and my mother listened to Annie Lennox. But for me it was the music of my parents, while classical music was mine."_

And that’s just the unique selling point of Sam Vance-Law: classic as a rebellion, revolt the other way around – that’s the way it can be. Only exception: The Beatles. "When I was eleven or twelve, I was a huge fan and could not imagine that there could be anything better than the Beatles. But that was actually the only pop band I ever heard or knew."

Anyway, despite the years in the choir, music has long been a hobby for Sam Vance-Law: "I would have liked to become a violinist, but with the best of my will I could not imagine practicing six hours every day – and you just have to do that, if you want to do it in the classical subject to something." So he continued to make music and enrolled after graduation in Edmonton first for English literature.

And that’s where it popped off: "From middle school onwards, I had come to know more and more people who spoke with similar seriousness about their favourite bands and albums as I did about the works of classical music. My classmates in Edmonton sometimes played in bands, I got interested." From now on, everything went pretty fast: About his new friends, one of them was the songwriter and musician Mac DeMarco, he played with their bands and finally caught fire. So Sam discovered pop as a stage musician. "There was a party and I wanted to go there. The bands of my friends played at these parties and at some point I just got involved."