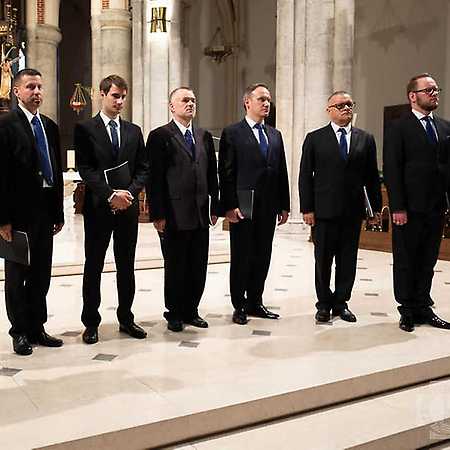 Royal Rorantists are a male vocal ensemble, founded and led by Stanisław Gałoński, dedicated to cultivating the musical legacy of the historical ensemble operating at the Royal Cathedral on Wawel Hill in Kraków for over 300 years. The Royal Rorantist Band (Capella Regia Rorantistarum) was founded by the enlightened ruler and patron of art, King Sigismund I the Old, as a foundation act in 1540. Their work, preserved in the Cathedral Archives, has been practiced by the contemporary Royal Rorantists for several decades. The ensemble has performed in many European countries, in the United States and Canada. It has recorded for CD, radio and television.
The Royal Rorantists perform mainly rorantist works, but also occasional and secular works (carols, patriotic, romantic songs, etc.) in their repertoire.