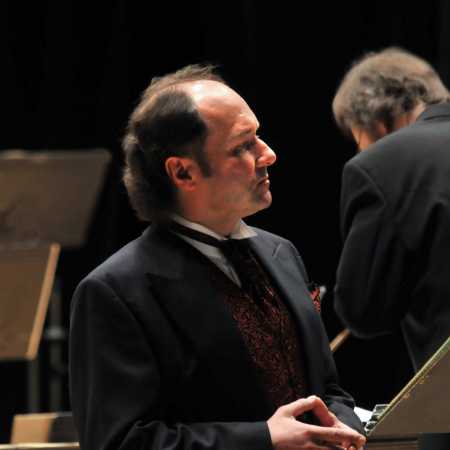 After studying violin at the Conservatory in Plzeň he graduated in 1985, Roman Janál singing at the Music Academy in Sofia. Already during his studies, he on the stage of the State Opera in Sofia (Don Giovanni, Eugene Onegin, Prince Tarquinius in Britten’s the rape of Lucretia) and he performed at chamber music festivals in Sofia, Bulgaria. After their studies, adopted its first engagement in Banska Bystrica, where after half-year tenure he moved to Chamber Opera (later the Opera Mozart) in Prague. Since 1994 works with FC Opera (the Queen of Spades – Tomsky, Faust – Valentin, Don Giovanni – Don Giovanni, Fidelio – Don Pizarro).

After a successful debut at the Prague State Opera, the role of Guglielmo in Cosi fan tutte, Figaro in Il Barbiere di Siviglia in 1995 was engaged as a soloist of the SOP. In November 1995, he became the absolute winner 30. the international singing competition of a. Dvořák in Karlovy Vary. Since 1995 he works as a vocal teacher at the Prague Conservatory. In 1997 he became a soloist of the National Theatre, where he performed many roles of domestic and world repertoire, for example. Grégoria in Romeo and Juliet, Figaro in Il Barbiere di Siviglia, Escamillo in Carmen, a role; in the Baroque tragedy lyrique, Castor et Pollux, whose portrayal has earned the prestigious Thalia Award for the year 1999.

In the 1999/2000 season he performed at the National Theatre in the role of Alexandra in the comic the Briefcase Twice Alexander and the title part in Mozart’s Don Giovanni. Enumeration of roles includes Silvio in Pagliacci, the count of Almavivu in Le nozze di Figaro, Germont in La Traviata, etc. Since 1984, working with Ms. radio, where he realized a series of studio recordings and recorded several CDs and song cycles of Opera Arias by the romantic period 20. of the century. The company made a new CD of Radioservis.

Regularly collaborates with prominent orchestras such as the CZECH NATIONAL SYMPHONY ORCHESTRA, the CZECH PHILHARMONIC, Prague Symphony Orchestra, PRAGUE CHAMBER ORCHESTRA. Under the leadership of conductor j. Bělohlávek was the BBC Orchestra in London, the solo part field mass and the opening of the wells of Bohuslav Martinů. The same song also performed under the direction of ch. Hogwood in Amsterdam. With the Orchestra Virtuosi di Praga participated in a tour of Australia and Austria. With the Prague Chamber Orchestra visited France, Liechtenstein, Switzerland and Japan. – Translated by Automatic service