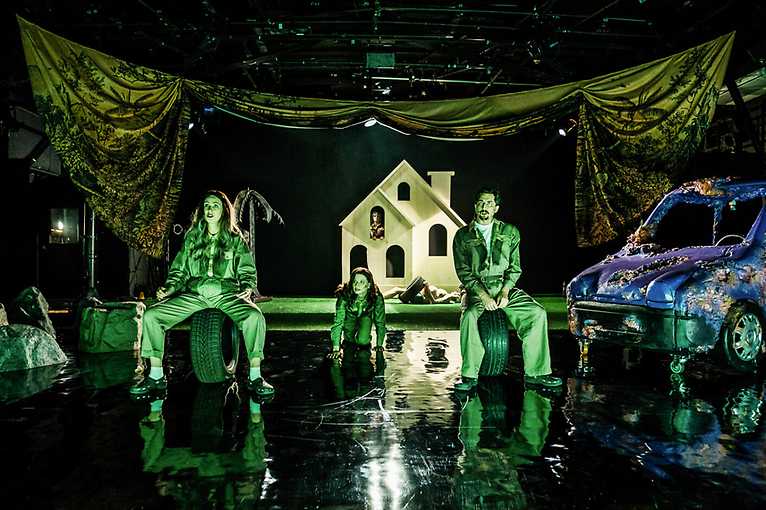 In his impressive Atmospheric Trilogy, Thomas Köck combines a family drama with a historical play, and a political thriller with a book of poetry. The Trylogy is an ominous flood of things, carrying ashore scraps of meaning, fragments of images, degraded biographies, fates of victims, concepts and definitions. The Trylogy is a transhistorical symphony in which all genre boundaries sink.

In the first part of the Trylogy entitled Raj. Potop, which will serve as the starting point for the performance at the Studio Theatre, we move along two lines of action leading along the history of exploitation. We follow the financial collapse of a family in the period of transformation, centred around the fate of a dancer working on junk jobs and her father, the bankrupt owner of a car repair shop. Then we move to the 19th century, to Manaus in Brazil, in the midst of the dark times of the rubber boom. We meet rubber barons who oppose nature’s right to exist to the natural laws of the market. They are fought by the architect Felix Nachtigal, who is to build an opera house in the jungle. However, in Köck’s work it is not easy to distinguish fact from fiction. It is true that the colonisers wear chic tweed, but at the same time they take a late-capitalist selfie.

The trilogy has a truly cosmological and apocalyptic dimension – both in a universal and individual sense. In Raj. Potop we witness the bitter end of the nuclear family and the failure of the idealist Nachtigal. All are victims here, mere pawns in a play about economic and ecological disaster, whose real hero is the invisible hand of the market.

In his Climate Trilogy, Thomas Köck reveals historical processes in a Shakespearean manner, without losing the human, individual perspective. He explores the limits both of our civilisation and of theatre itself as a medium.