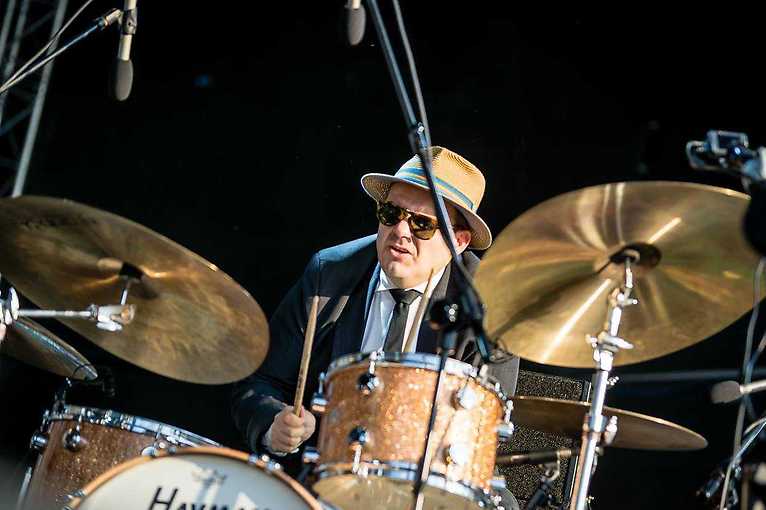 In the middle of the first week of March, Qby Janicki’s solo concert will take place, presenting material from his latest solo album “Intuitive Mathematics”.

“Intuitive Mathematics” is an illustrative improvisation, recorded using piezoelectric amplified percussion instruments and an instrument of his own construction called “The Sound Board”. This instrument is made up of metal springs, screws and tongues, attached to a pine board. The highly amplified piezo amplification brings all sounds closer to the listener’s ears, allowing the rich harmonies contained in the drum kit and “non-musical” elements such as friction, squeaking and vibrations that occur inside the highly resonating set of mechanisms. All amplified instruments are redirected to an analog mixer that sends a signal to the speakers behind the kit, allowing you to play at a continuous limit of feedback, controlled by frequency correction, voltage changes in the individual membranes, placing different kinds of elements on drums or positioning your body relative to the set of instruments and speakers. The signal from the mixer is also processed by a number of effects, which introduces the listener to a world of warm, analogue, electroacoustic synthesis.

Qba Janicki – born on 6 February 1989 in Bydgoszcz. Currently resides in Sokołowsko. Growing from the artistic community gathered around the famous Mózg club. Over the last 15 years he has played hundreds of concerts, where he has performed with such artists as Jerzy Mazzoll, Sławek Janicki, Roscoe Mitchell, Tomasz Sroczyński, Toshinori Kondo, Peter Brotzmann, Kris Wanders and Fred Frith. He currently works in Maldives bands with Marek Pospieszalski, Kondensator Przepływu with Bartłomiej Chmara and Martyna Chojnacka, Wojtek Mazolewski Quintet, Yo Nelly! with Steven Buchanan and in newly formed duos with Warsaw composer Teonika Rożynek or Belgian producer Obsequies. Apart from playing instruments, he also creates theatre music in cooperation with Maciej Podstawny, Paweł Łysak, Artur Pałyga or Grzegorz Jaremko. He also marked his presence on the hip hop scene by producing the album Hore, the legendary rapper Vienia. Additionally, as a co-founder of Mózg Foundation, he cooperates in organizing cultural projects in Bydgoszcz and Warsaw.