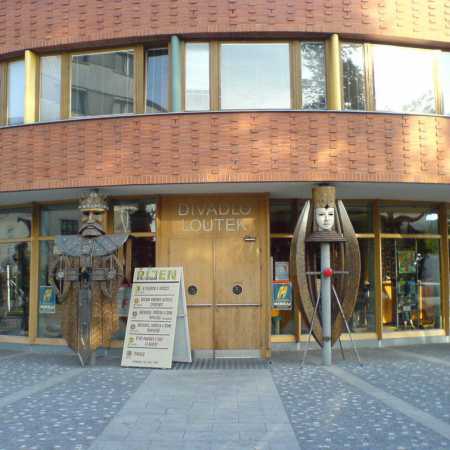 Puppet Theatre Ostrava is a proffesional stage with stable artistic ensemble, estabilished by the statutory city of Ostrava. It weas founded in 1953. The theatre has its seat in a historic building at the Masaryk square for almost half a century. On September 26, 1999 a new building was opened, with seats for 176 spectators. To the building, an extension with an alternative stage for 80 spectators, an amphitheatre and a Café in the Puppet Gallery was built. Its operating was started on May 20, 2011.

The creations of the Puppet Theatre Ostrava focus mainly on children and youth. Every work day the theatre offers performances and creative workshops for maternity schools, basic and secondary schools. On Sundays, the theatre offers performances for the whole families. One or two evenings in week are dedicated to adults. The alternative stage is a place for artistic and therapeutic workshops and children’s theatre studio.

The Theatre is an organiser of two international festivals. In odd years, the Theatre offers the Spectaculo Interesse festival – a selective competitive show of the best puppet performances from the entire world. In even years there is the Theatre without barriers festival, focusing on establishing communication bridges between people within wide and heterogeneous spectre of the society, as well as the bridges across interpersonal barriers of all kinds.

Every summer Puppet Theatre invites semi-professional and professional puppet groups to its amphitheater and they entertain children within the event Summer with puppets. In the alternative scene there is always a unique interactive puppet exhibition that introduce visitors to the history of puppet theatre and to different types of puppets.