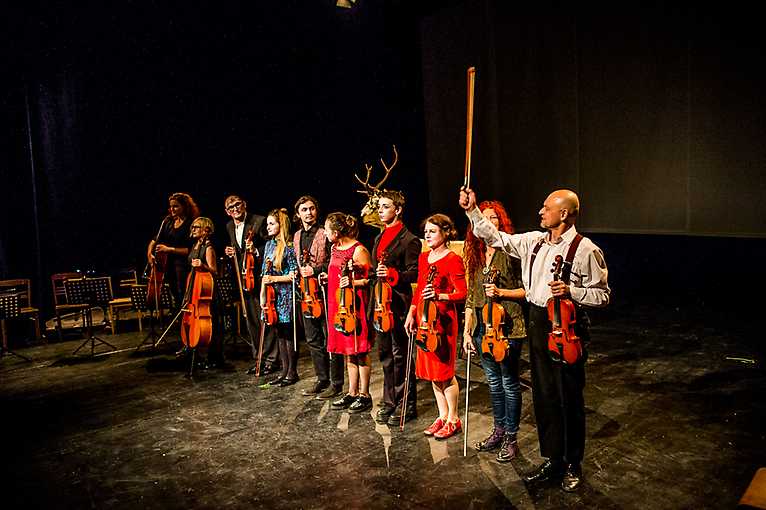 Teatr Cinema was established in 1992. The group is made up of professional actors, artists and musicians who, under the direction of Zbigniew Szumski, produce original performances in Michałowice. The performance is based on texts by Thomas Bernhard Chodzenie, Michel Huellebecq Serotonin and texts from brochures on assembling furniture and operating kitchen robots. The play is set in an abandoned banqueting hall that served as a cinema or recreation hall, where yoga and dance courses, weddings, funerals and reunions of veterans and graduates took place. The choreography of the performance is born out of these themes – situations. A choreography that is neither a background nor a dance insertion. It is possible to talk and dance at the same time without being a revue artist.

The list of celebrations (acts of the performance): wake, christening, prom, wedding, christening, wake. These situations can loop. The memory of the place is inconsistent and fragmentary. Things that are less important can disrupt the hierarchy of memories. The unimportant “pushes” and manifests. A perfect place for the prophet, false and true. _…the debased, babbling, blaspheming, insulting, urging and soothsaying, toiling, playing, maddening, yurodivy arrives and resides in an aura of holiness… A holiness that is thoroughly paradoxical, that injects poison into the tissue of reason. A holiness that is not afraid of extremism…

To be able to laugh in a conversation about death, in a time of conversation in which the themes of illness and death dominate, may be the mark of a prophet. Is the modern prophet of pandemic times a philosopher, an artificial intelligence engineer, or an investor? The absolute power of the prophet produces a surplus of free arrangements.