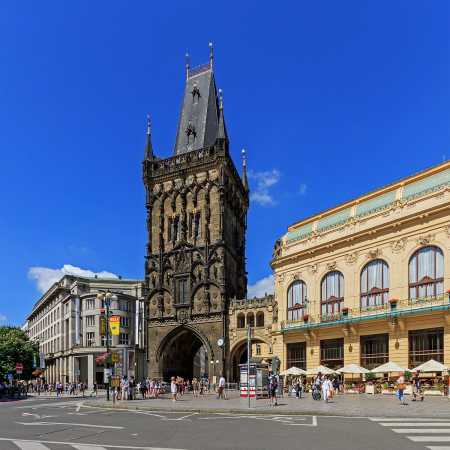 The Powder Gate is one of the most significant monuments of medieval Prague. It was here that the Royal Route of Prague started and I was driving a significant road from Kutná Hora, where silver was mined to the royal treasury. The late Gothic city gate was built on the site of the older Tower Tower, connected with the fortification of the Old Town of Prague from the time of the reign of Václav II. The older tower object referred to as the “Mountain Gate” on the already mentioned communication.

Today, the tower was acquired only in 1878–1886 for pseudo-gothic puristic adaptations led by architect Josef Mocker. It was the Old Town Bridge Tower. Mocker made a new wrought-iron roof with corner towers and a gallery and removed the clock from the early 19th century. All the vaults, as well as the plastic embellishment of the gate, which was completed by the remnants of Rejsk’s original decoration, are the work of its reconstruction.