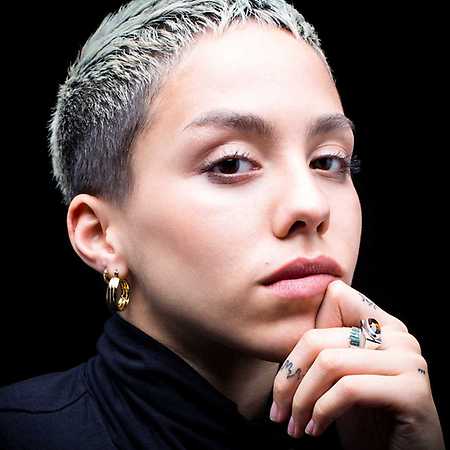 Poppy Ajudha is a 22-year-old musician from South London. Her unique vocal tone and melodies, that reminisce of classic jazz and soul singers combined with her ability to write exciting and fresh sounding compositions sets Poppy apart and places her at the forefront of the South London music scene– the most fertile and important scene in Europe right now. With a Saint Lucian born father and British mother she grew up with a diverse set of influences and ideas. Musically, while her dad played a lot of Motown and Roots Reggae, her mother familiarized her to funk, rare groove and soul music through the tapes she’d play during long car journeys to visit family. Also through her mother, Poppy was introduced to feminism –independence and strength was felt through the way she bought Poppy and her sisters up. Alongside her love for music, Poppy holds interest in colonialism and its effects in the postcolonial era, gender and the shaping of current social issues as a product of historical perspectives. She is a first class BA Anthropology and Music graduate from the School of Oriental and African studies. Her studies questioned the western centric outlook through which we view and homogenise music of different cultures, as well as how gender plays a part in the creation and production of music – all of which is epitomized through her lyrics.

Since her childhood, Poppy has always wanted to be a singer and performer. From a young age, she wrote poetry and at age 16, she met a saxophonist who introduced her to a youth club workshop where she met a band to perform with. At 17, Poppy discovered STEEZ, where she met her current band and developed a love for performance. Since then, she has collaborated with a host of exciting artists and tastemakers such as Tom Misch, Kojey Radical, Gilles Peterson and more. Her debut headline show in November 2017 sold out 4 weeks in advance and run in association with Gal-Dem, with an open discussion on gender, race and identity taking the place of a supporting act.

Over the course of 2018 she’s been tipped as One To Watch by the likes of Jamz Supernova, Wonderland, Line Of Best Fit, Notion Magazine and Amazing Radio, released her critically acclaimed debut EP ‘Femme’ with tracks receiving support from R1, 1xtra, 6Music, Beats at radio and more. She has toured the UK and Europe in support of Tom Misch and Jamila Woods, sold out a headline show at Omeara, previously been supported by PRS as part of their ‘Women Make Music’ and ‘Keychange’ campaigns which supports the development of outstanding female creatives and innovators from across Europe.