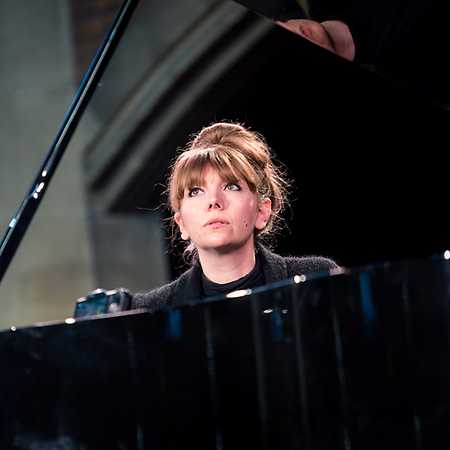 Poppy Ackroyd is a composer from London, currently based in Brighton. Classically trained on violin and piano, she makes music by manipulating and multi-tracking sounds from just these two instruments. Her debut album Escapement was released in December 2012 and a DVD – Escapement Visualised – featuring bespoke visuals by Lumen for each track on the album, was released in September 2014. Feathers, her second album, followed in November 2014, and builds on the concept behind her debut, with most of the sounds again coming from the violin and the piano, however this time the tracks also feature other keyboard and string instruments. In 2017 she signed to Bjork’s label One Little Indian and released a mini album Sketches in August. Sketches is an acoustic solo piano album comprising of 10 tracks. Six of these are reworkings of tracks from Escapement and Feathers, the other four are arrangements of new tracks from latest full album Resolve. Again largely piano and violin based, it features guest instrumentalists for the first time – Manu Delago on hang, Mike Lesirge on flute and clarinets and Jo Quail on cello. Poppy is a member of Joe Acheson’s live project Hidden Orchestra (Tru Thoughts Recordings) and has worked on numerous projects with other musicians, artists, filmmakers, animators, dancers and actors. Poppy Ackroyd gratefully acknowledges support from PRS for Music Foundation.