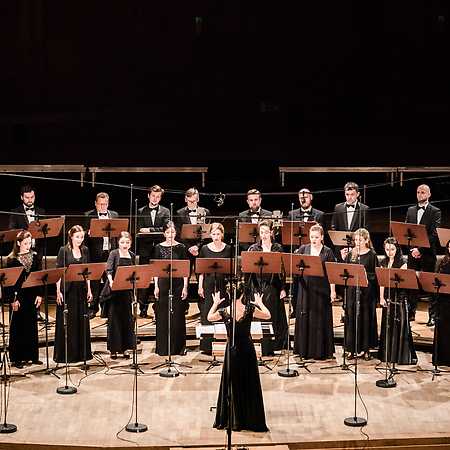 The Polish Radio Choir was founded in 1948 by Jerzy Gert. The Choir was then directed in turn by Adam Pałka, Jerzy Kurcz, Maciej Ogarek, Stanisław Krawczyński, Bronisława Wietrzny, Małgorzata Orawska, Włodzimierz Siedlik. Since June 2010 this function has been performed by Artur Sędzielarz. From the day of its foundation until 1994 the Choir was an integral part of the collective body named the Polish Radio and Television Orchestra and Choir. The Choir’s repertoire includes a cappella music as well as music forms combining vocal and instrumental elements. The Choir performs works representing all styles and epochs, with particular attention given to Polish music. Apart from giving concerts, the Choir has had performances recorded, including archival recordings, for Polish Radio and Television, as well as for many local and foreign phonographic companies.

The Choir has performed many compositions by Polish contemporary composers such as Three poems of Henri Michaux by Witold Lutosławski under the direction of the composer and the works of Krzysztof Penderecki. The Choir also took part in the following numerous festivals in Poland and abroad: Wratislavia Cantans, Ludwig van Beethoven Festival in Warsaw, the Warsaw Autumn, the Poznań Musical Spring, the Duszniki Chopin Festival, Music in Old Cracow, Rossini Opera Festival, Settimana in Monreale, le Festival de la Musique Contemporaine Centre Pompidou, Oratorio und Cantata Festival Rateburg, among others.