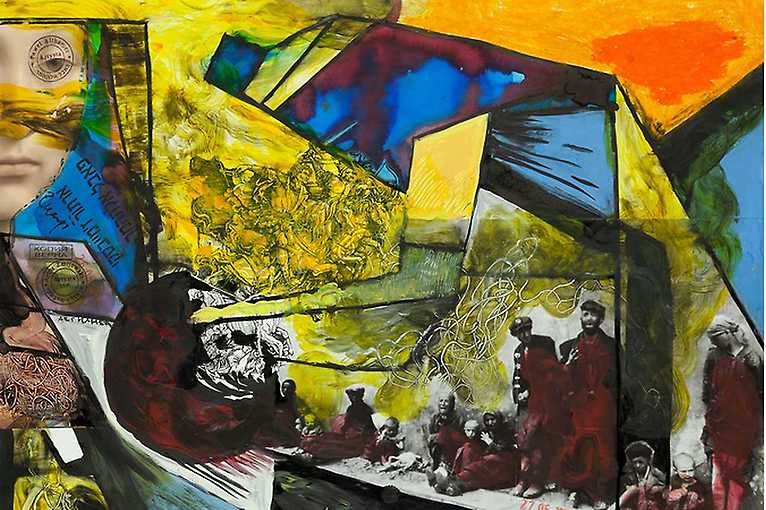 *The exhibition “Final Song” by Paweł Althamer and Artur Żmijewski will present a selection of 20 collages created between 2017 and 2019.

The artists, graduates of Grzegorz Kowalski’s studio and devoted to the idea of Oskar Hansen’s Open Form, debuted in the 1990s. Since then, they have become part of the canon of Polish and world art. Since graduating from the Academy of Fine Arts in Warsaw, they have been in touch, befriended, exhibited together and collaborated. During their joint residency in Japan, they began a series of works on paper, using ink and stamps, and since 2017 they have been creating collages that reference the works of poets. They are inspired by Czesław and Oskar Miłosz, Paul Celan, Stanisław Grochowiak, Rafał Wojaczek, among others. The collages are made of fragments cut out from books – from erotic and pornographic publications by Taschen through natural science and anatomical albums to historical and scientific atlases. The multi-layered, painterly works have clear texture, color, and dense composition. War, Shoah, suffering, eroticism are some of the themes appearing in the exhibition. None of them dominates. Completely absent are the politics that the artists have accustomed the public to over years of fighting in the field of critical art. Nor are there calls for uprisings or sings of revolution. Instead, there is a reflection on poetry and art. The artists made a selection of poems which were included in the publication accompanying the exhibition, prepared in two language versions: Polish and English.