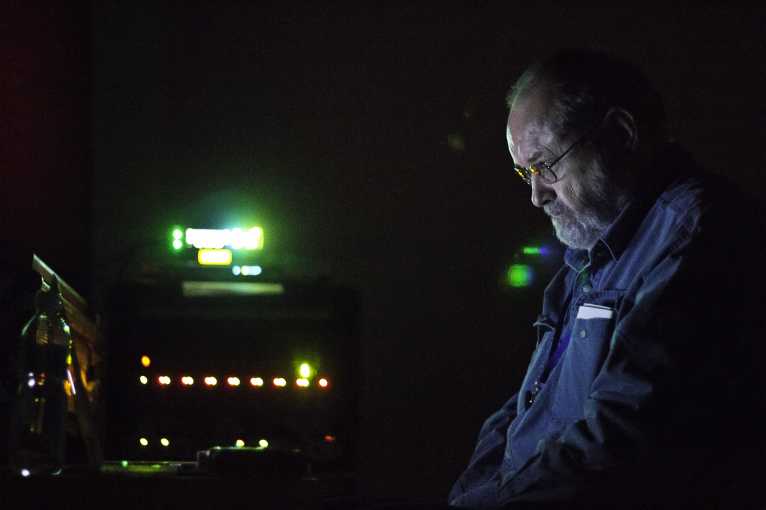 Phill Niblock makes thick, loud drones of music, filled with microtones of instrumental timbres which generate many other tones in the performance space. Simultaneously, he presents films / videos which look at the movement of people working, or computer driven black and white abstract images floating through time.

Phill Niblock is an intermedia artist using music, film, photography, video and computers. He makes thick, loud drones of music, filled with microtones of instrumental timbres which generate many other tones in the performance space. Simultaneously, he presents films / videos which look at the movement of people working, or computer driven black and white abstract images floating through time. He was born in Indiana in 1933. Since the mid-60’s he

has been making music and intermedia performances which have been shown at numerous venues around the world among which: The Museum of Modern Art; The Wadsworth Atheneum; the Kitchen; the Paris Autumn Festival; Palais des Beaux Arts, Brussels; Institute of Contemporary Art, London; Akademie der Kunste, Berlin; ZKM; Carpenter Center for the Visual Arts at Harvard; World Music Institute at Merkin Hall NYC. Since 1985, he has been the director of the Experimental Intermedia Foundation in New York where he has been an artist/member since 1968. He is the producer of Music and Intermedia presentations at EI since 1973 (about 1000 performances) and the curator of EI’s XI Records label. In 1993 he was part of the formation of an Experimental Intermedia organization in Gent, Belgium – EI v.z.w. Gent – which supports an artist-in-residence house and installations there. Phill Niblock’s music is available on the XI, Moikai, Mode and Touch labels. DVDs of films and music are available on the Extreme label, on the Mode Records label, and on the VonArchives label.

The roots of this performance is to play the sympathetic resonance of the room structure, individually sculpted according to its architectural singularity, and which the plot of the show remains permeable to the immediate moment, using exclusively acoustic methods of production and governed by motions which implicate the full motor capabilities of the body.

My first challenge to produce a continuous sound wiht a percusif musical instrument, evolved through an investigative process of the acoustic gifts of the performance space. A large drum is used as a vibrational amplifier, with varied implements rubbed on the skin to activate its vibrational potential. These implements are positioned beforehand around the drum for access in my circular walk. After having personally developped this technique for eight years, I’ve highlighted three key elements in the interrelationship :
-the atmospherique conditions of the space volumes for their influence to the vibration propagation.
-the regularity of the ground leveling
-the specific nature of audience and the energy which emanates from the venue.

(Energy in the etymological sense of the word “force in action”.)

Today my knowledge of materials and shapes allow me to produce sound vibrations that are often compared to some particular sound of synthesizers. However, the physical perceptions of my sounds, have nothing similar to those issued by a speaker. We are no longer in that frontal relation with the sound wave emitted by the menbrane. The immersion phenomenon in the sound material is no longer dependent on the power of sound system, but by the resonance of surrounding structures.

From larger through to smaller scales, all turns around an axis. Mine, during the performance it’s the horizontal drum. The focus of my rotations is consciously refer to ancetrals rituals used by numerous culture and civilization and called circumambulatoin sinistrocentrique.