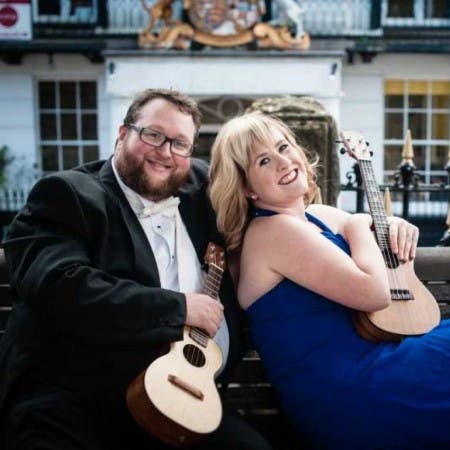 Opera-lele is a crossover act specialising in singing music from opera and musical theatre accompanied by the emotionally powerful yet understated twang of the ukulele. Having both trained as singers at the Royal College of Music and Goldsmiths College in London, George Bartle and Amanda Harkett have gone on individually to forge careers for themselves as entertainers of the highest calibre. In 2016, Opera-lele burst onto the music scene with a performance on the Main Stage of the Grand Northern Ukulele Festival. Audiences were stunned and excited by what they saw and heard. They received a standing ovation and were described by many as the surprise hit of the festival. Since then, Opera-lele has been counting standing ovations at music festivals, theatres, churches and even castles across the UK and overseas. In 2017, Opera-lele was voted ‘Breakthrough Ukulele Artist’ by the readers of UKE Magazine.