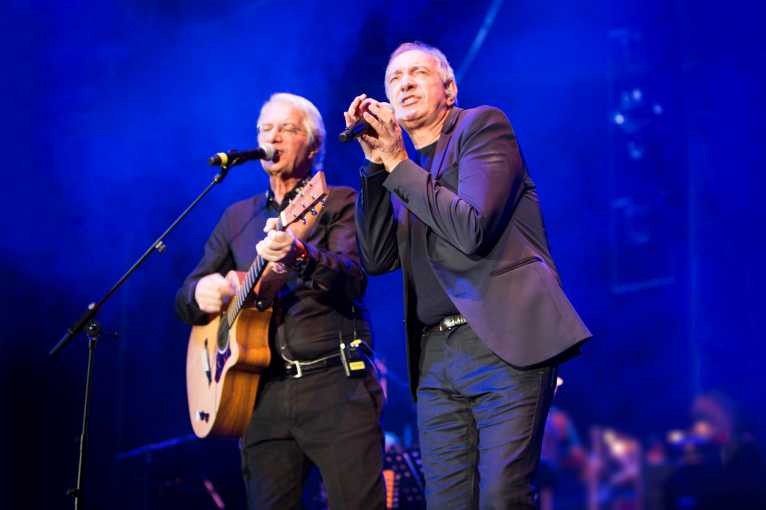 Everyone knows their songs like Flying Through The Air from All the Way, Boys, Stay from Cinderella with Piere Cosso and Bonnie Bianco, or Sandokan. In addition to Ennio Morricone, they are one of the most successful soundtrack artists in the world. Even today they are still active and full of power and have announced their return to the German stage.

Hearing 25 of their most successful hits in Italy and around the world from works like Dune Buggy, Sandokan, Orzowei, Banana Joe, and Bulldozer will make this evening unforgettable. They are joined on stage by their Italian band which consists of 18 of Italy’s most beloved musicians, all of whom have appeared in numerous TV shows, and a big surprise: a full choir of forty people who will represent the famous Feuerwehr-Chor.

The Oliver Onions Friendship Party is much more than just a concert. On stage are two authentic superstars of Italian and international music. Some know them under their own name Guido & Maurizio De Angelis, others under one or more of the many pseudonyms, such as G & M Orchestra, Dilly Dilly, Kangaroo Team or the famous Oliver Onions – everyone knows their songs.

During their successful career, they have played with Ennio Morricone, Gianni Morandi, and Patty Pravo. They wrote big hits for Jane Birkin and Agnetha Fältskog (ABBA). What has made them known worldwide, however, is the artistic partnership with the legendary Italian duo, the unforgettable Bud Spencer & Terence Hill.