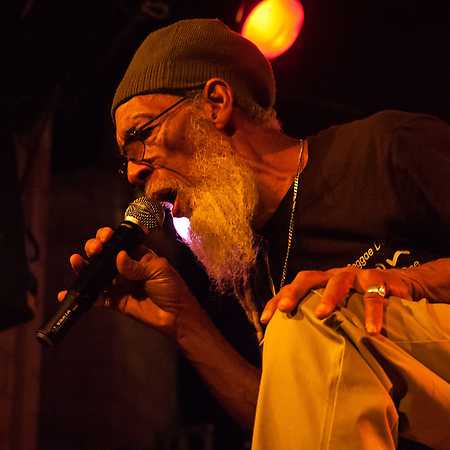 Oku Onuora  I A Tell

Oku Nagba Ozala Onuora (born Orlando Wong, 9 March 1952), known as the “father of Jamaican dub poetry” is a Jamaican dub poet and performer. He is accredited with being the first to use the phrase dub poetry to describe his poetry and presentation & recording dub poetry in Jamaica. He grew up in the slums of Eastern Kingston’s Franklin Town and received an informal education from Rastafarians. His rebellious nature initially led him to engage in demonstrations against police violence and painting slogans on walls. There are countless articles that have been written listing his impressive and extensive credentials including, his seven years served in the Jamaican penitentiary system.

He began writing poetry in 1971 and became the first inmate to be allowed to perform with a reggae band in 1974 when Cedric Brooks’ band The Light of Saba performed in the prison. However, Oku’s poetry was declared “subversive” and his writing was confiscated from his cell. He considered himself a political prisoner and continued writing, with his poetry finding an audience in the outside world after being smuggled out of prison, coming to the attention of Jamaican writers. While behind bars, Oku focused his rebellious energy in a positive direction by writing Confrontation, an award winning play aired by the Jamaica Broadcasting Corporation (JBC) and Echo, a bestseller collection of poems, published in 1977.

Oku has performed all over the world and has achieved notable success in Jamaica, the US and Europe. With a compelling history, a voice rich with his homeland language and a passion few performers aspire to, he has disturbed and exalted audience with his word bullets. His legendary first album Pressure Drop was released in 1984.