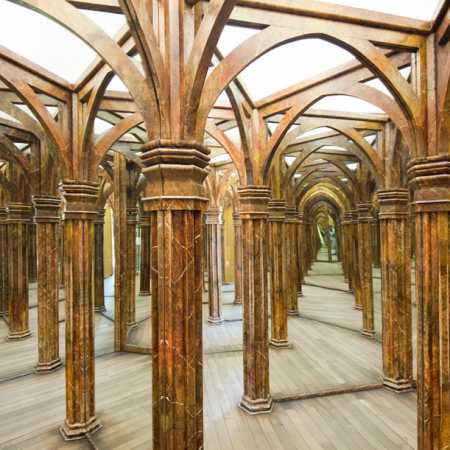 The Mirror Maze at Petřín was originally built as a pavilion of the Club of Czech Tourists at the Prague Jubilee Exhibition in 1891. It was built by the Prague carpenter master Matěj Bílek according to the design of the architect Antonín Wiehl. The inspiration for the construction of the maze was apparently a mirror maze in Vienna’s Prater.

The wooden maze building was originally near the corner of the Industrial Palace, two years later it was moved to Petřín next to Petřín Tower. The construction is an attempt to create a form of the former Gothic Vysehrad Gate, called Špička, built in the second half of the 14th century by Charles IV. The maze building is a proof of the Gothic construction at the end of the 19th century.

In the middle hall, there is a diorama depicting the struggle of the Prague with the Swedes at the Charles Bridge in 1648. The unusual combination of the three-dimensional scene with the Hradčan painting is the work of the brothers Adolf and Karel Liebscher and Vojtěch Bartoňka. Both mirrors were installed in both side rooms, while the left room of the building was equipped with various convex and convex mirrors (so-called laughing hall) in 1911. There are 35 common and 15 distorted mirrors in the maze.