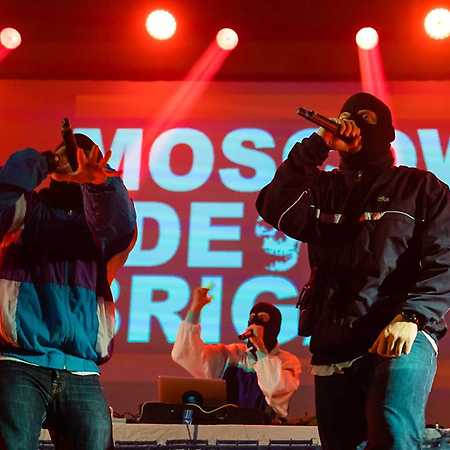 Moscow Death Brigade is a hardcore/rap phenomenon from Russia – a band that plays a unique and aggressive mix of rap, metal and punk, described by the band as “circle pit hip-hop” and flavored with socially and politically relevant lyrics. Initially created as a full-on DIY team back in 2007 MDB has its roots in Russian militant Antifascist movement and graffiti underground scene. As the band moved from gigs in basements and abandoned buildings in Russia to the stages of big clubs and festivals all across Europe they have brought with them the bare-knuckle mentality of Eastern European street life combined with a socially conscious message. The ski-masks worn by MDB’s members that used to be a must during all shows in Russia have now become a staple for the band’s stage image as can be seen in all the music videos and during gigs. Since its first days the band was recognized not only for their energetic and adrenaline-filled music but also for its charity work, including numerous benefit gigs, tours and releases in support of Antifascist activists and victims of Neo-Nazi attacks.