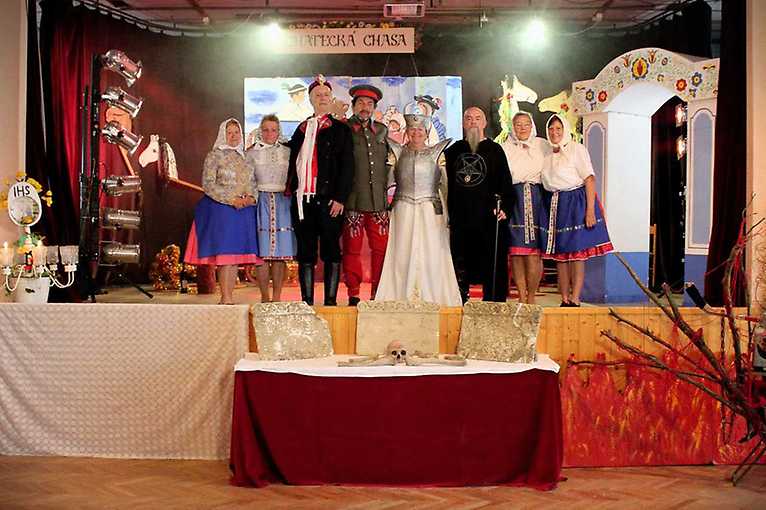 Film trilogy Moravia, O Fair Land is an experimental Slav epic whose authors depict the current character of the Moravian countryside and its traditions. Wine, Zombies, clerical fascists, and banging musical numbers will follow every viewer who watches this almost-documentary-but-basically-musical-horror of a classical scale.

Moravia, O Fair Land I: Co člověka potěší víc, než hezká písnička od srdce? / Petr Šprincl / Czech republic 2015 / 30 min. – Experimental western-horror from the setting of Moravian Slovácko brings a fresh perspective of the legend of Wenceslaus I, Duke of Bohemia. In the dingy setting of a folklore festival, the legendary Duke of Bohemia Boleslaus I – zombie from a wine cellar – fights with his brother Wenceslaus for the character of Czech nationality and a plate of tomato sauce. This film essay about the myths of Czech and Moravian nationalism is a sarcastic depiction of rituals that construct national identity but are empty and hollow even though they try to distance themselves from otherness. The sanctity of folklore is subverted through archaic film and video formats which contain many mistakes and flaws, and a sloppy mix of brass music countered with a voice-over.

Moravia, O Fair Land II: Zrození fašismu z ducha fašaňku / Petr Šprincl / Czech republic 2016 / 43 min. – The second installment in the series offers an even darker descent into the soul of Moravia, which is just as intoxicating as the slightly delirious state after having a sip of wine and chewing on Mother Earth’s lump. Visually restless pilgrimage focusing on the undercurrent of Moravian identity whose echoes wouldn’t want to be heard even by Friedrich Nietzsche.

Moravia, O Fair Land III : Genesis / Petr Šprincl / Czech republic 2019 / 65 min. – Ivana Slabáková, the guru of Moravian brass music, announces a historical discovery – The Mikulčice Script, revealing historical importance of the Great Moravia. Slabáková puts together Moravian patriots, brass band, clerofascist Jan Uprka and Jiří Valtr, a satanist from Brno. A drama will be staged. Senior club from the village Rohatec rehearses the Great-Moravian drama, which reanimates the dead from ancient Slavic grave fields. Zombie apocalypse ensues and Moravia is cleansed of Christian scum. After this epic clash of cultures, the life in Moravia goes back to normal. Brass music plays, zombies work in the wineyard and hope for an even better crops next year.