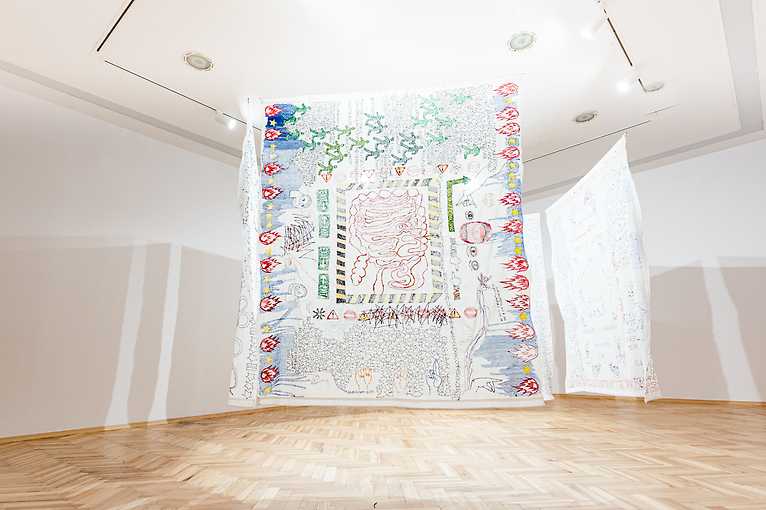 The emigration experience is often similar, if not the same. It means to satisfy the need for a better life or is a promise of one. But first you have to go through assimilation into society, including learning the language. Language is the tool that distinguishes emigrants, if only because of the accent. On the other hand, emigration causes languages to intermingle and, consequently, neologisms to appear.

For her exhibition at the Foksal Gallery, Monika Drożyńska prepared works that are just such neologisms. Themes related to the merging of languages and their mutual influence as a result of migration are strongly present in her works. The exhibition includes works made in the artist’s characteristic embroidery technique, containing words or phrases in languages other than Polish, including Ukrainian. The title of the exhibition Dużo dobre / дуже добре is a translation of the sound of the phrase “very good” in Ukrainian, from Cyrillic to Latin alphabet.

Emigration has always been present in the artist’s family. Drożyńska recounts: _I was 11 at the time. Mum was sitting in the kitchen and crying. My parents tried to emigrate to Australia, but we didn’t get visas. Mum never stopped dreaming about leaving. It was 2004 and I was all grown up when she called me and said: we are moving to the UK. Today they have British citizenship. My life is divided between Krakow and Lancaster. I bring clothes and tea from England. I myself worked abroad in the late nineties and every summer holiday. I weeded beds at Made in Holland and in Philadelphia, I was a nail technician at Grace Nails. Thanks to the money I earned during my travels, it was easier for me to live during my studies in Poland.

During the exhibition Dużo dobre/дуже добре, the artist collects her own emigration experiences and relates them to the current situation of Ukrainian residents in Poland. Drożyńska says: It is a phenomenon for me that someone wants to come here, while my family always wanted to leave.

For reasons beyond the control of the gallery, the entrance to the SARP grounds is temporarily closed. Visitors to the gallery are asked to call +48 228 276 243.