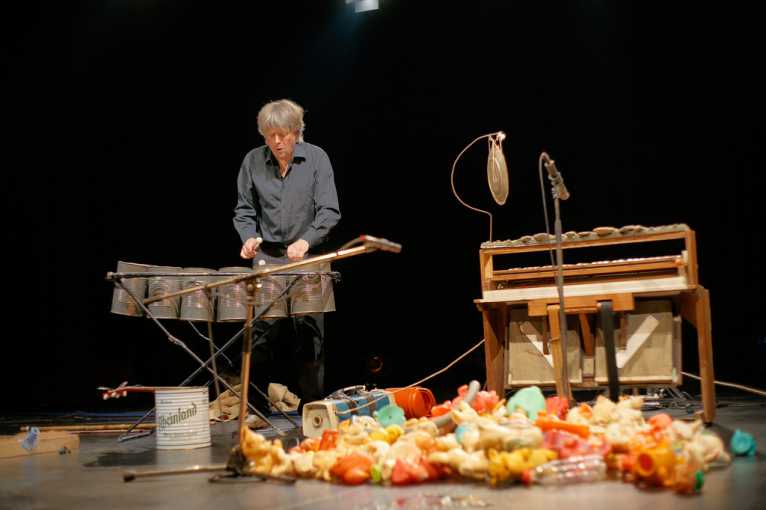 Belgian music innovator and inventor, who uses handlebars instead of flute and cans instead of guitars. Handyman, who plays music with the help of chair, garden kettle, PET bottle or rocks. This show will definitely be a very interesting experience!

Not only a remarkable musician and composer, but also a unique and unrivalled musical inventor, that is what you would read on Max Vandervorst’s business card. Did you think handlebars cannot be used as a flute and a tin played as a guitar? Well, think twice. For almost thirty years this DIY guy has been fascinating the music scene by his concerts where he plays “musical instruments” – be it chairs, garden can, PET bottles or stones. Vandervorst’s performances are not a mere concert or just about music. It is a play with an unlimited idea that is capable of transforming anything dead and mute into an object of melodies, tunes and rhythms. Especially his Concerto for Two Bicycles, The Paper Orchestra or Symphony for Abandoned Objects were received with a great success.

A double dose of an unconventional music temperament awaits Prague, as the pianist Marc Hérouet shall perform together with Max Vandervorst. But Max is more than a phenomenon in the field of music interpretation. Besides being a thematic writer and university lecturer he also leads music workshops all around the world. And you bet it is a marvellous news that Max will lead several of these renowned workshops also in the Czech Republic. These will be organized as part of the Mladi Ladi Detem project both for kindergartens and schools and for general public.