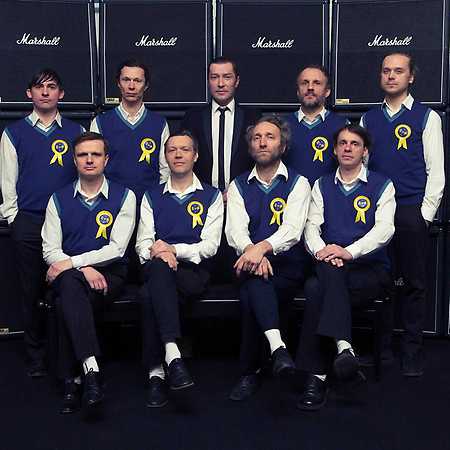 Mitch & Mitch is a polish band founded in 2002 by Bartek Tyciński and Macio Moretti.Mitch & Mitch is a band shrouded in mystery. As a rule, they do not give interviews, and each of the artists is hidden under a pseudonym that contains the name Mitch. Behind it are well known and valued musicians. They have been on the Polish stage for 17 years and with each project they amaze the audience more and more. As the leader of Macio Moretti reveals: Mitch & Mitch is a band – a laboratory where artists explore what affects people. However, this group of music freaks didn’t come from nowhere. Their beginnings date back to 2003 and the duo of Bartek Tyciński and Macio Moretti. The line-up was quickly expanded and the debut album Luv Yer Country was released in a mocking alt country style. In their work, the artists are not limited to the frames of one genre, they freely experiment with different styles and collaborate with musicians from all over the world, including Felix Kubin and Igor Krutogolov. The band itself became more recognizable thanks to the album 1976: A Space Odyssey. The album recorded with Zbigniew Wodecki, which is a combination of old tracks of mainstream artist with alternative playing of Mitch & Mitch, gained the status of a platinum album and received Fryderyk for the best album of 2015.