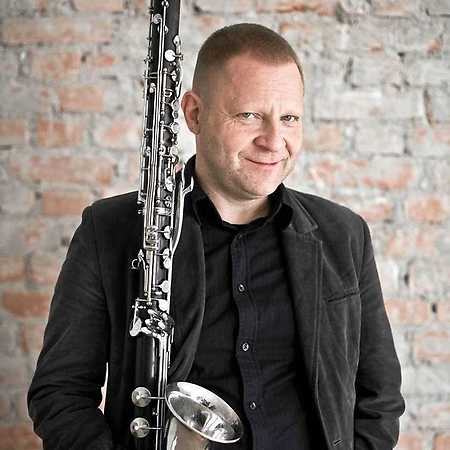 Mikołaj Trzaska is a Gdańsk-born saxophonist, bass clarinettist and composer. He studied fine arts between 1988 and 1991. He grew up on the basis of yass – an artistic and social movement which at the turn of the 1980s and 1990s rebelled against the ossification of the national jazz community. Trzaska was a co-founder of the most important yass formation – the legendary Miłość and (the still active) Łoskot. Although the momentum of yass music expired many years ago, he became a leading figure on the Polish improvised scene. After the yass period, he recorded several concentrated and quiet albums with the Olesia brothers. He also accompanied the poets Świetlicki and Andruchowycz, creating music and literary projects with Andrzej Stasiuk. Today, he is the leader of the international Volumen trio, a member of, among others, the International Volumen Trio, Above all, however, it is realized on the grounds of radical free jazz, collaborating with dozens of the world’s leading free improvisers, including Peter Brötzmann, Joe McPhee, Ken Vandermak, Peter Friis Nielsen, Michael Zerang, Clementine Gasser, John Tchikai and Noel Akchote. He is also a recognized composer of film and theatre music, working on a permanent basis with Wojciech Smarzowski, among others.

The Round Table Orchestra