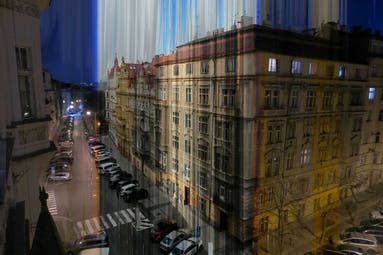 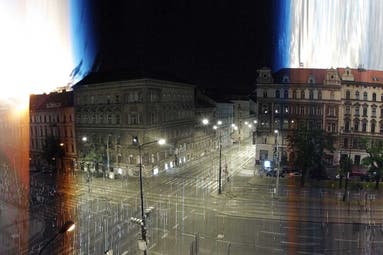 At Fotografic Gallery, Michal Kindernay presents his subtle audiovisual projects by subversively capturing the influence of the ubiquitous automobile traffic on city life and the state of the Czech landscape.

12 minutes 30 seconds. The Nocars video installation extracts only moments without the presence of passing cars from the 24-hour recording of the streets in the center of Prague (Myslíkova, Národní, Ječná, Vinohradská, Francouzská, etc.). Only units of minutes remain from the many-hour recording. Thus, the project describes with ease and emphasis the problem of burdening the city center with passenger car traffic and provokes important questions about the city's future development within the public debate. The audiovisual essay Ad finitum captures the under-construction section of D11 motorway through Trutnov and Žacléř regions, which was supposed to be part of the imaginary connection on the Paris–Moscow route and which is another of the eight highway stretches currently under construction in the Czech Republic. Through this essay, Michal Kindernay and Sára Vybíralová ask essential questions like how many audio, visual and physical asphalt scars the Czech Republic still needs. And how many more can the Czech countryside still bear?

Michal Kindernay is an intermedia artist who works with interactive connection of sound, image, and natural atmospheric processes. His audiovisual installations combine the tools of art, technology, and science. They often touch on the topics of ecology and reflect on environmental issues. His works include both video performance and interactive installations, as well as intermedial and documentary projects and musical compositions. Kindernay completed his bachelor's degree at the Faculty of Fine Arts of the VUT in Brno in the Video studio under Petr Rónai and his master's degree at the FAMU Center for Audiovisual Studies in the workshop of Miloš Vojtěchovský. He is the co-founder of the art organization yo-yo, initiator of the RurArtmap project, curator and external pedagogue of CAS FAMU.