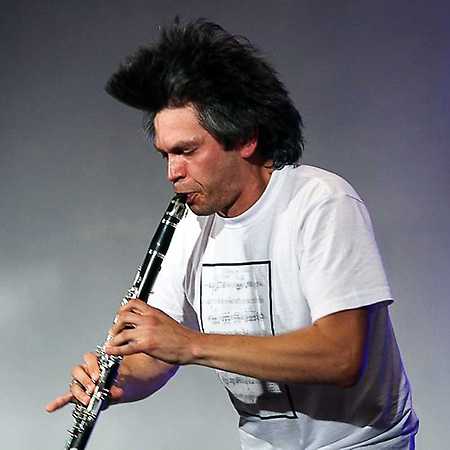 Michal Gorczynski is a clarinettist, composer and music teacher born in 1977. He graduated from the Fryderyk Chopin Music Academy in Warsaw. Since 1998, he has been composing music for various instrumental ensembles as well as theatre music (around 25 plays for drama and puppet theatres). He is active as an improviser and modern music performer. He is also the author of installations, theoretical writings, radio features, and underground films. Since 2002, he has been a member of Kwartludium ensemble, specialising in modern music performance. Since 2008, he has worked on extending the sound of the bass clarinet, inspired by beatbox and in cooperation with one of the leading Polish beatboxers, Patryk Matela a.k.a. Tik Tak. He has coined the term of “composed education.” He received grants for the creation of alternative educational manuals. Since 2013, he has been running a project entitled Music for Languages, writing original music for the Yiddish language (CD published by Multikulti Records), Japanese poetry (CD published by Fortune Records), and Persian poetry by Jalāl ad-Dīn Rūmī.