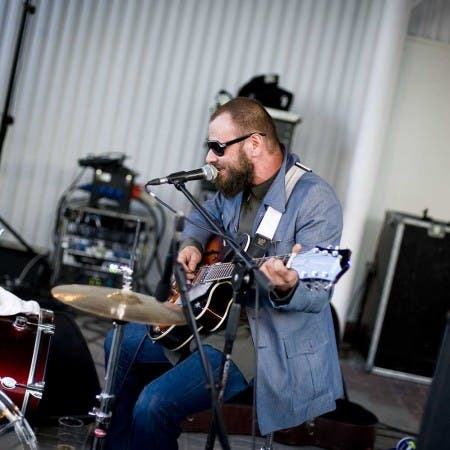 The Marshal – repeatedly unrewarded, adored and hated, constipated and embarrassed, gbur, buc and charming. A versatile simultaneous multi-instrumentalist and a mocking frustrating poet, Tony Clifton of the Polish underground. Marshal is the only one-man band in Poland exploring the area of punk rock. He debuted with the album Marszałek Pizdudski One Man Band (Karrot Kommando, 2014), on which they brought to life and killed the blus-cantry-pank genre. On his grave he danced in the company of the band Konie (Marszałek i Konie, KK, 2016), and immediately afterwards the album Split (KK, 2016) was released, with a dirty, minimal electro-punk, based on the raw sound of bass and drum machine. Soon, the Marshal abandoned the 6-string guitar and his blues point of departure and is currently interested in performing “spoken word teknopunk” – a background reduced to drums and looped bass riffs, against which he recites cursed and broken-up poetry and hits 30-year-old Yamaha DD-14 drum pads. 2018 saw the release of a split with the duo SIKSA Ptriotyzm jutra (Pasażer, Melina), and 2019 saw the release of its latest album – III. Marszałek is a solo project of Piotr Markowski – ex-bassist, vocalist and lyricist of ska-swing band Vespa, Gruby from bigbit group Pomorzanie and active member of performance group Wielkie Pomorze.