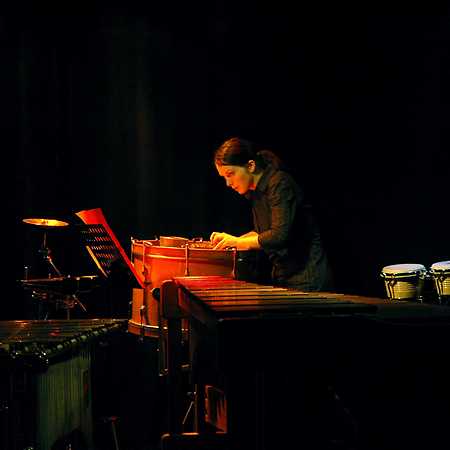 Drummer, born on 25 October 1979 in Szczecin. She is a laureate of many competitions, including first prize at the National Percussion Auditions in Warsaw (2001), first prize at the Mikołaj Stasiniewicz International Percussion Competition in Warsaw (2004), Grand Prix and the audience award at the Polish Radio Folk Music Festival “Nowa Tradycja”. (2006), special award European Broadcasting Union – Svetozar Stracina Festival Bratislava (2007). In 2009 she was a finalist of the IPCL Percussion Duo Competition in Luxembourg. She also received the Award of the President of the City of Warsaw (2004, 2006). Since 2002 Magdalena Kordylasińska has been cooperating with Miłosz Pękala, with whom she creates the percussion duo Hob-beats – the only active band of this type in Poland and one of the few in the world. His repertoire, apart from percussion compositions, also includes transcriptions (including Maurice Ravel’s “Alborada del gracioso”, Johann Sebastian Bach’s “Goldberg Variations”) and pieces written especially for the group (e.g. “Passacaglia” and “Concerto for two percussions and orchestra” by Anna Ignatowicz-Glińska, “Retourning Sounds for Magda & Miłosz” by Miłosz Bembinow). He gives concerts in Poland and abroad (e.g. in Germany, Israel and Brazil). Both solo and in the duo she has taken part in many prestigious festivals and concerts, including the “Percussion solo and in a band” Festival in Koszalin, Crossdrumming Festival in Warsaw, Festival of Contemporary Music “Warsaw Autumn”, Festival of Chamber Music “Quartesencja” in Warsaw, “Musical Evenings in the Old Dean”, Portraits of Composers in Warsaw, “Sources and Inspirations” in Krakow. Since 2005 he has also co-created the Kwadrofonik quartet. The ensemble was formed by combining two duos – Lutosławski Piano Duo (Emilia Sitarz, Bartłomiej Wąsik) and Hob-beats.