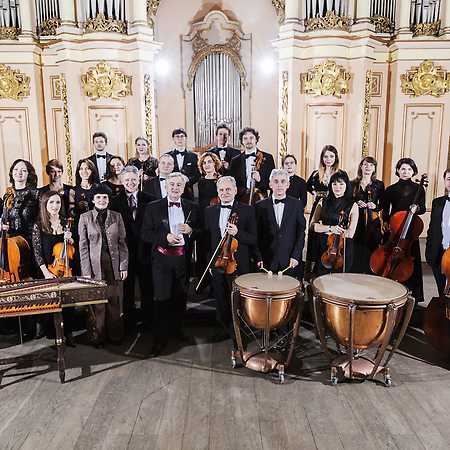 Chamber Orchestra “Lviv Virtuosos” is a chamber orchestra founded in 1994, composed of outstanding musicians from Lviv. The ensemble quickly became recognized and acknowledged Lviv group representing its rich cultural tradition. The founder and current artistic director of the orchestra is Serhiy Burko, a national artist of Ukraine known in Ukraine and abroadas a musician but also music activist and organizer of numerous artistic projects . Volodymyr Duda, a recognized artist of Ukraine is a concertmaster and team leader, experienced interpreter of contemporary and classical music, member of many European orchestras and festivals. The orchestra itself gave over 500 concerts performing successfully in various cities of Ukraine, as well as Poland, Germany, Switzerland, Slovakia, Belgium, Israel, Colombia, Ecuador, the Netherlands, Denmark, the Vatican and Italy. The ensemble initiated many artistic projects, such as: Talents of the Third Millennium, Musical Dynasties of Ukraine, New Music in Ukraine. The orchestra has recorded so far more than 10 CDs including Anthology of Ukrainian Music, Fiddler on the Roof – popular music selection, Music for Everybody presenting the works of contemporary American composers, Four Seasons by Antonio Vivaldi and Do you remember me?- popular melodies. The CDs have been released in a large number in Ukraine, the USA and Poland.