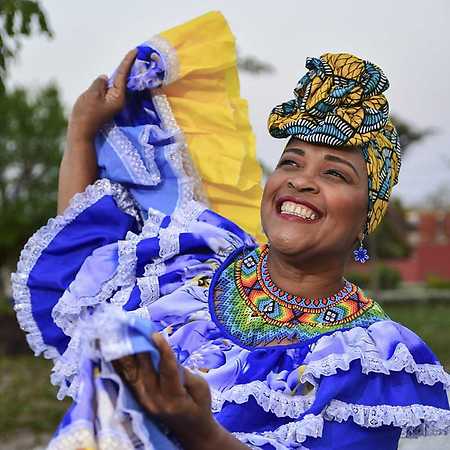 The yellow glow of candles held by the female dancers flickers reflected on the bodies of their partners, while the colourful shawls draped on their arms and the ruffled dresses underline their undulating motions. The women sway sparingly to the rhythm clapped by the singers, the singers meander between the beats of the drums, looking for a space to show off their agility. This is how people of Northern Colombia celebrate energy borne by the rhythms of cumbia, bullerengue, tambora and chandé chalupa.

Lina Babilonia, singer originating from María la Baja in the Colombian province of Bolivar, together with the group called Son Ancestros, both upholds and expands the rich Afro-Caribbean traditions whose essential ingredients include singing and dancing to the accompaniment of an extensive set of percussions. Here, the vocal phrase and the polyphonic structure of the rhythms are woven into intricate patterns, resulting in captivating compositions.

There is an element which plays a crucial role in this arrangement: the joyful improvisation on tambor alegre, a single-head drum of African provenance. The drummer holds it between his legs and hits the head with both hands, altering the technique of sound’s attack so that his commentary to the melody of the singer is as varied as possible. The tambor is supported by the two other drums, called llamador and bombo.