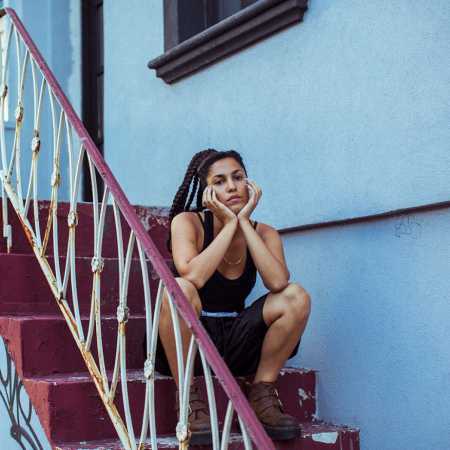 Globetrotting singer/producer Yasmine Dubois has only been making music as Lafawndah for a short time, but she is already causing ripples worldwide with her futuristic take on global electronic music. After packing in her jobs as a gallery curator in Mexico City (where she also played drums in the all female band Nidada and New York), the half-Iranian, half-Egyptian musician moved back to Paris, after previously having studied at La Sorbonne, to concentrate on honing her “ritual club music,” influenced by Nina Simone, Grace Jones, Missy Elliot, Kate Bush, traditional Middle Eastern singers, dancehall queens and the Night Slugs label’s modernist take on grime and bass.

For her debut self-titled EP Lafawndah flew to Guadeloupe to work with Portuguese producer Garagem Banda, Emily King, and zouk veteran Jean Claude Bichara. Like her acclaimed 2014 debut EP, the recording of Tan began on an island with the same minimal studio set-up. This time, with collaborators Nick Weiss and Tamer Fahri, it was Fire Island off the South Shore of New York rather than the Caribbean island. Soon enough proceedings hopped to the totemic island of Manhattan, where she embodied the role of executive producer by folding the like-minded ADR and L-Vis 1990 into her process to help realize a warped vision of esoteric industrial rhythms fused to an aggressive palate of nomadic atmospherics.