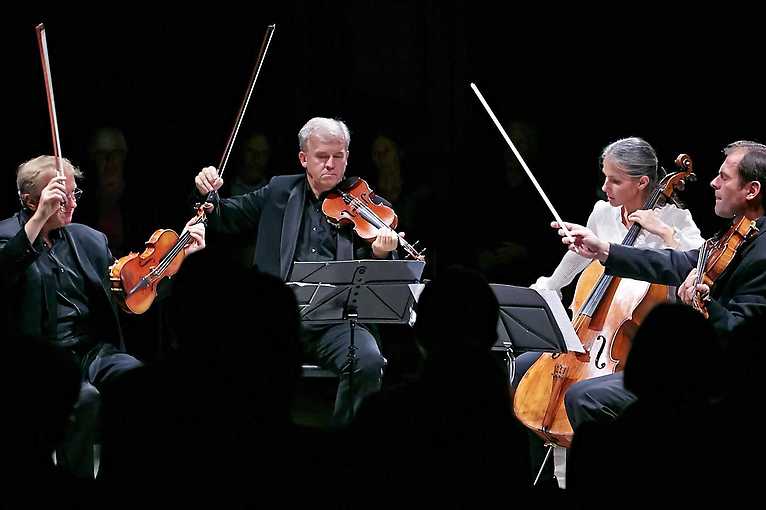 The dramaturgy of the classic part of the 15th “American Spring Festival” will reflect the theme of Exile.

At the concert of Martinů Quartet you will hear compositions by Tomáš Svoboda who was born in Paris in 1939. He was a professor at Portland State University for 27 years. Svoboda’s catalog contains over 200 compositions, including six symphonies, five concerti, and 12 string quartets. His music is performed worldwide, and recordings of more than 50 works have now been released. Svoboda’s Piano Trios CD recording received a 2001 Critics Choice Award from the American Record Guide, and his Marimba Concerto received 2003 Grammy Award nomination. String Quartet No. 9, op. 193 was written in 2010. The work was inspired by the story of an immigrant who, unable to integrate into a new cultural environment, took his own life. String Quartet No. 12, op. 202 was also written in 2010, and it’s the last string quartet of Tomáš Svoboda. The composition subtitled "post scriptum" is a work of deep feeling in which all human experience is accepted and transformed into tenderness. Written at a time of great optimism on his part, Piano Quintet No. 2 is one of the most joyful works of Bohuslav Martinů. The farther Bohuslav Martinů got from Europe, the more firmly he moved into the great line of Czech music. He lived in France from 1923 to 1940, eventually discovering a distinctive neo-Baroque style using dissonant lines. He started evolving toward a more Romantic style, a process that accelerated after he fled France to escape the Gestapo and landed in the United States. He wrote this quintet from February to April 1944, Allied Forces would soon be on the way to liberation.

The Martinů Quartet, originally the Havlák Quartet, was formed in 1976 by the then students of the Prague Conservatoire. They put favorable circumstances to good use by intensive practice and study of the quartet repertoire, resulting in seven prizes at prestigious international competitions. They are prizewinner of the ARD Munich (Germany), Evian (France), Yehudi Menuhin (Portsmouth, Britain), and The Prague Spring competitions. These successes stood at the start-line of the Quartet’s brilliant international career, placing it firmly in the internationally respected Czech string-quartet tradition. The original Havlák Quartet changed its name in 1985 as a token of its commitment to promote the work of one of the great masters of Czech music, Bohuslav Martinů. Their efforts were rewarded by a MIDEM prize in Cannes in 2004 for the best CD of the year in the chamber music/solo category – the CD is the second of three NAXOS CDs with Martinů’s seven quartets and other chamber compositions. Although the main weight of its repertoire is centered on the music of the world’s great composers, the Quartet takes pleasure in seeking out neglected works and in giving first performances of pieces by contemporary composers. Martinů Quartet has received at MW Classical Music Web’s “CD of the Month’s” award for its recording of works by Sylvie Bodorová (Terezín Ghetto Requiem) and Ronald Stevenson. It is engaged in a long-term project of performing and recording the complete quartet output of the leading Czech composer resident in the USA, Tomáš Svoboda. Apart from its busy concert schedule, which takes in prestigious podiums at home and abroad, the Martinů Quartet plays on the Czech Radio, as it has done on the BBC, Radio France, ARD, and ORF.

Karel Košárek is a much sought-after Czech pianist who appears not only as a soloist but also with leading orchestras. A graduate of the Musical Faculty of the Prague Academy of Performing Arts and the Southern Methodist University in Dallas, he is a winner of the Smetana Piano Competition and the Corpus Christi Piano Competition, and a prizewinner of the Walter Naumburg Competition in New York. Recitals at previous seasons in New York, Dallas, Palm Beach, Calgary, Tel Aviv, St. Petersburg and Bangkok, as well as concert appearances in Europe and Japan, indicate the scope of his international artistic activity.