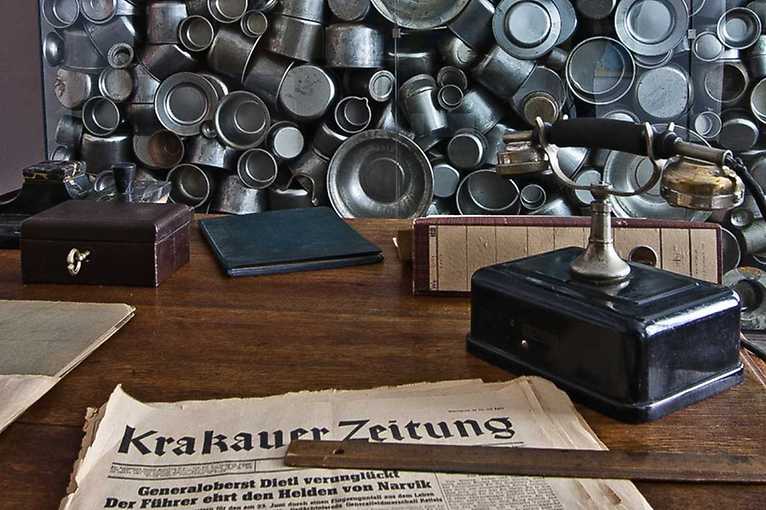 Exhibition Kraków under Nazi Occupation 1939–1945 is located in the former administrative building of Oskar Schindler’s Enamel Factory at 4 Lipowa Street. The exhibition is primarily a story about Kraków and its inhabitants, both Polish and Jewish, during World War Two. It is also a story about Nazi Germans – the occupiers who arrived here on 6 September 1939, brutally disrupting Kraków’s centuries-long history of Polish-Jewish relations. The great history of World War Two intersects here with everyday life, and the personal dramas of individual people overlap with the tragedy which affected the whole world.

The wartime history of Deutsche Emailwarenfabrik – DEF – and its owner Oskar Schindler was brought into the limelight in 1993 by Steven Spielberg’s film Schindler’s List. Ever since that time, tourists from all over the world have been coming to Lipowa Street to visit the place where Schindler saved the lives of over a thousand people. The character of Oskar Schindler and the life stories of the Kraków Jews he saved are presented in the exhibition as part of the city’s complex wartime history. Oskar Schindler’s heroic attitude is presented in close-up in his former office – luckily, the historic room located in the factory’s administrative building has been preserved intact throughout the years. The dominant feature here is the symbolic “Survivors’ Ark” made of thousands of enamelled pots, similar to those manufactured by Schindler’s employees during the war.

The exhibition scenario was prepared by a team of Kraków-based specialists (Katarzyna Zimmerer, Grzegorz Jeżowski, Edyta Gawron and Barbara Zbroja) headed by the curator of the exhibition Monika Bednarek. The narrative created by that team combines documentary photographs, eyewitness accounts, film documentaries and multimedia presentations. All of these elements are put together to make a vivid, chronological vision of the city’s history. The exhibition presents the tragedy of the war both in the individual, and in the collective dimension, but it also portrays everyday life in the Nazi-occupied Kraków as it is immortalized in ordinary objects, photographs, newspapers, personal and official documents.