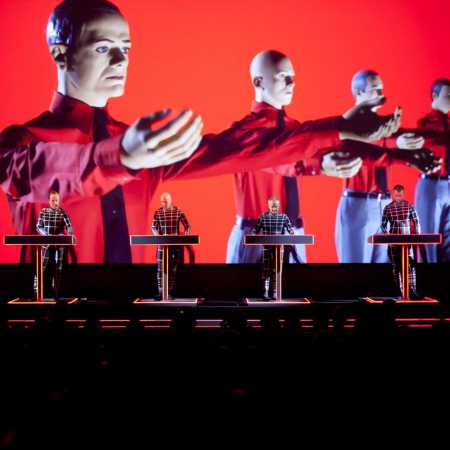 The band was founded in 1970 on the initiative of Ralf Hütter and Florian Schneider. Together they founded the Kling Klang studio in Düsseldorf, where they created the unique aesthetics of the Kraftwerk (Eng. Power Plant). Fascinated by futurism, expressionism and technological development, they began experimenting with robotics and electronics. Their innovative approach brought them international fame. In the 1970s and 1980s, Kraftwerk created a soundtrack to the digital era, which was yet to come. At the end of the second decade of the 21st century, their music still sounds very recent and remains just as valid. Just have a look at the titles of tracks such as Autobahn, Computer Love, Europe Endless, Metropolis and Pocket Calculator.

The band’s compositions use synthetic voices, computer-generated rhythms and melodies as well as innovative sound technologies. The group’s music has had a huge impact on the contemporary scene. Kraftwerk self-constructed the genre of electro music, inspiring techno, hip-hop and synthpop artists. Strongly influenced by Kraftwerk were Aphex Twin, David Bowie, Depeche Mode, Daft Punk, New Order, The Belleville Three (Juan Atkins, Derrick May and Kevin Saunderson) and thousands of other artists. The music of Germans was sampled by Afrika Bambataa, Jay-Z, Kanye West and even Coldplay. Kraftwerk concerts combine music and performance and are referred to as “Gesamtkunstwerk” – a total work of art. Modern concert versions of the group’s classical works retain the charm of the originals, and the latest sound technologies only add splendour to them.