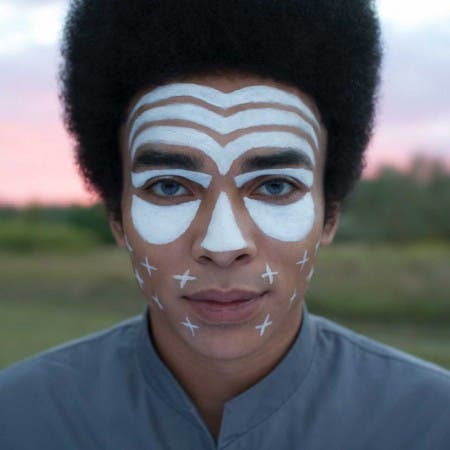 At the age of 12 he started exploring the possibilities of electronic music, experimenting with primitive looping on a PSP and then pursuing audio-engineering courses, learning so fast he rapidly started tutoring others. The last couple of years have seen Kimyan Law blossom into the artist we see before us today. Deep explorations into his African roots have led him to create complex mosaics of ancient sound with modern aesthetics. A true ‘artist’ rather than the all-too-common ‘engineer’ found in modern electronica, he constantly talks of the meaning and imagery in his music, referring to his tracks as “portraits” and as having “fragrances”.

Kimyan Law’s debut LP, ‘Coeur Calme’, was released on Blu Mar Ten Music in October 2014 and was immediately recognised as one of the year’s highlights, seeing him shortlisted for ‘Best New Producer’ at the Drum & Bass Arena Awards, listed second only to Spectrasoul as one of 2014’s best LPs by Ministry of Sound and surrounded by universal praise from audience and peers alike. His 2016 follow-up LP, ‘Zawadi’, does not disappoint. Expanding the vocabulary established with ‘Coeur Calme’, Kimyan Law has managed to create a new collection of music even more playful and yet more profoundly serious than the first. Having its roots in Drum & Bass, the music flies far beyond the confines of that often-formulaic genre, expanding sonic ranges and disrupting standard arrangements. Mpunga incorporates African instruments and influences into his set up, achieving a rare organic and human quality among the cold electronics. Glittering cascades of tuned percussion are expertly weaved into layers of state-of-the-art bass and the result is a stunning, future/primitive array of romantic and cinematic music that, with its sheer humanity, seduces everyone who experiences it.