Kaleo is an Icelandic indie rock band. The group currently has three LPs to their credit, which have sold several hundred thousand copies. Kaleo's single Way Down We Go has reached almost 40 million views on YouTube and hit the top of the Billboard Alternative Songs chart; they have performed at Coachella and Lollapallooza and supported the Rolling Stones. The group's work is described as a fusion of folk, indie pop, rock and blues. 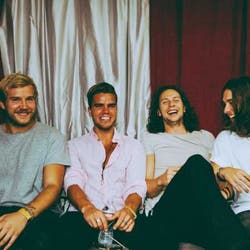