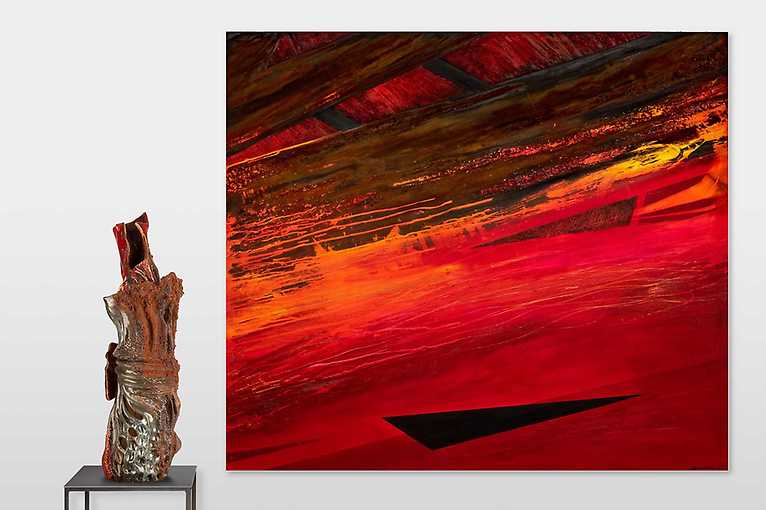 Joanna Roszkowska creates paired compositions consisting of large abstract paintings and ceramic sculptures. Despite the perfect symbiosis, the elements are not dependent on each other, they live their own lives – each is an individual, finished work. Joanna Roszkowska is a graduate of the Faculty of Industrial Design at the Academy of Fine Arts in Warsaw. She studied sculpture in the atelier of Krystian Jarnuszkiewicz and Wiktor Gutt. She lives and works in Warsaw. She does not make sketches. She creates her works intuitively, surrendering to the matter she uses. In the case of clay, it is the relationship between the hands and the clay. Clay is an extremely strong material. It absorbs my emotions. It remembers. Most importantly, clay has always seemed to me a natural extension of myself, it allows emotions to flow through when I knead it and to remember them when it hardens after firing. I absorb from the world around me, from people, architecture and nature. I let the clay remember. I give back what I have received. It is an intimate, natural bond._.

There are two currents running through her sculptural work, which intermingle and recur in each series of sculptures. The first is a reflection on the relationship between man and nature, the second is the dualism and sensuality of the human being. The first shows admiration for nature, its power and beauty, but also its fragility and the influence of human actions on its shape. The second strand is sensuality, sensuality and gender dualism. By creating her sensual sculptures, she brings to the surface difficult, hidden subjects – such as the issue of gender fluidity and imprisonment in an inappropriate body, and sexuality itself, which is often deeply hidden. Her sensual sculptures are a provocation, but not a direct one. It is an attempt to show that on the one hand we feel liberated, but on the other we are constantly accompanied by a large measure of shame, a sometimes conservative view of intimate issues, which is a consequence of cultural dictates and prohibitions.

Her abstract paintings are also a state of emotions. Sometimes it is nostalgia, anger and sometimes inner energy. Her paintings are as varied and expressive in form as the moments she experiences. She likes large formats which allow for expression, hand painting and strong, vivid colours. She uses a variety of structures and materials, including iron filings, which she transforms into rust that changes its hue when exposed to the moisture in its surroundings, making it live. Ceramics and painting intertwine and complement each other. What they have in common is emotion and expression.