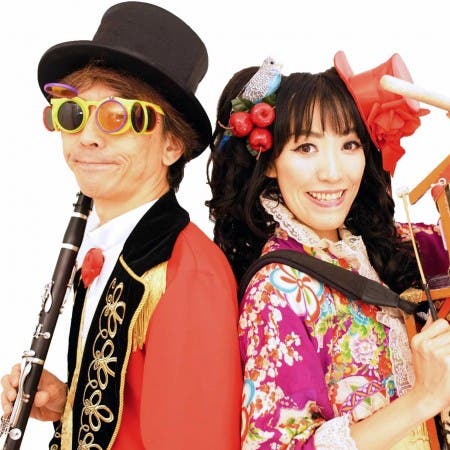 Jinta-la-Mvta is a musical group founded in 2004 by Ohkuma Wataru, clarinetist and bandleader of the groundbreaking Japanese experimental folk band Cicala Mvta, and his partner and drummer Kogure Miwazo. Ohkuma’s interest in Klezmer music began in the late 80s. He was one of the first Japanese artists who listened to and played the genre. He has a repertoire of dozens of Klezmer tunes through his distinct perspective, setting him apart among non-Jewish klezmer musicians. Considered as one of the few Klezmer experts in Japan, he has also penned various pieces on Klezmer and Japanese liner notes of Klezmatics and Frank London. Since the Great Northeast Japan Earthquake and the subsequent nuclear crises in 2011, the band started to perform not only on club stages and festivals but also at anti-nuclear protests and demonstrations on the streets of Tokyo, attracting a new and wide range of audiences and fans.