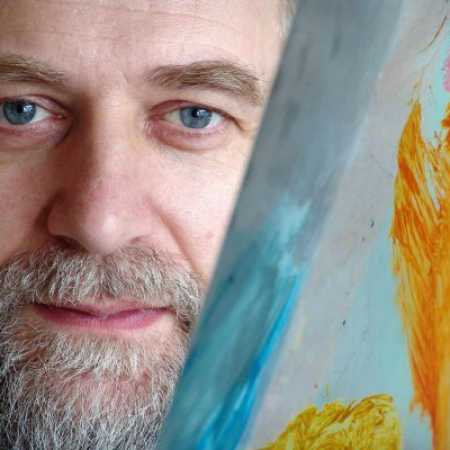 Jan Merta himself claims his painting started progressing in its genuine way in the middle of the 80s of the 20th century, when studying at the Academy of Fine Arts. Then he experienced the first controversies with the academic staff. Having turned away from literary copying of reality seen outside and having focused his attention on rendering his personal message, he created what he calls his first genuine painting. It is possible to perceive this individuality in various ways: as feelings, expression, personal iconography, symbolics or ideas, etc. When talking about the first period of Merta’s work, it is likely appropriate to direct our attention at the problem of symbols to follow up the clues to his art expression. A symbol is usually described as an non-imitating sign in the way of an ideogram or language system. It is not complete abstraction with Merta however, rather synthesis. The author uses monumental pictographs, the forms of which are elementarily simplified. Often rendering relationship between outward and inward spaces, formations present just space reservoirs. Thus a place arises; in contrast to vast abstract and geometrical “space extension”. A place as an idyllic reservoir of the space to live in (Merta’s formations are often envelopes for human bodies: clothes, sleeping-bags). Though, a body is usually absent, leaving just a memory of a touch, a trace, behind it. A sort of body space “casts” is the point. Unlike sculptural execution of a similar subject, color and transposition into surface are important for Merta. Thus surface lays emphasis on visual nature of memories. The topic of inside space is principal (Two Boxes, Green Vault); it indicates the delimitation from within, from the memory. This is logical to be connected with the topic of an imprint (Vine, Corner: drawings originated in the prints of everyday materials, cloth, wine, and coffee). Recent Merta’s works even represent figure itself (Officer and Sun), again in the shape of a trace of a temporal action though (shadow). Merta works with the method of associations, certain motif working as a part for the whole (a mask in the painting For Alpinists).